Excerpt: Learning to Stutter by Sherm.Davis 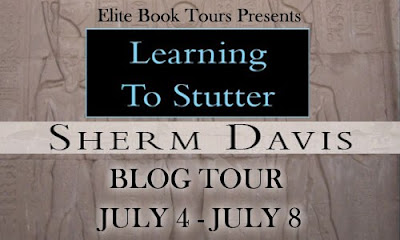 Welcome to my tour stop of "Learning to Stutter" by Sherm Davis, presented by Elite Book Tours.  To follow the full tour, please visit here. 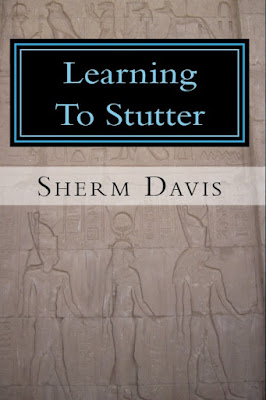 Kenneth Kocher seems to have it all - a good heart, a sense of humor, decent looks, and lots of money. What he doesn't have is something most of us take for granted - freedom of speech. Kenneth lives with a severe stutter which has wreaked havoc with his life since childhood.

After much embarrassment, pain and soul-searching, Kenneth realizes that to free his inner self he must accept the fact that he cannot be cured, and that he must learn to stutter with grace. Along the way he meets another stutterer and a young widow who are both dealing with the stumbling blocks in their own lives.

Using an experimental syntax to portray the neurological component of the syndrome, the novel gives the reader a unique view of stuttering from the inside out.

PRAISES FOR "LEARNING TO STUTTER"

This is an extraordinary book. It’s the inside dope on stuttering. And if one person was born to tell the story, it’s David Sherman. And does he have a story to tell. The plot is consummate, the writing proficient, the pacing skillful, with a clarity of detail that renders it very realistic. After awhile, I found myself caring about all the characters, even (or particularly) the minor ones, oftentimes because they reminded me of myself, and were therefore incredible familiar. It is a reflection of the author’s versatility –as educator, in math and Language Arts, as musician and writer –and diversity –Jewish, New York born and bred, having resided all over the world –that some parts of the writing even speak to the Oriental in me. As each of the characters, stuttering and non-, go about their lives, problem-solving, adapting, you cannot help but see the parables at a universal level. Resonant, poignant, and ultimately elucidatory, this book get an A+ from me.

In addition to those who struggle with dysfluency and their friends and family, I highly recommend this novel to educators and speech pathologists to ensure their understanding of the multi-faceted impact that this neurological syndrome can have on one’s identity.

EXCERPT FROM "LEARNING TO STUTTER"

Why is the name so difficult? Perhaps because there is no way to reach into the verbal bag of tricks which every person who stutters carries with him in a desperate attempt to seem normal. Word substitution (the favorite of all stutterers who block more on certain sounds than others) is impossible when the name is fixed and finite. Linking the end of one sound to the start of another to increase fluidity is impossible also, because the name begins with a specific sound, and most stuttering occurs on the initial syllable of a word.

But the great author, unaware of Kenneth Kocher’s internal trauma, was in a hurry, and only scribbled his name and gave a cursory nod before moving on to the next person in line. It was only as he was walking away that KK realized that he was fixating on his own name, and hadn’t said a single word to one of his personal heroes.
On the heels of this humiliation, he still had one more errand to run, and it was better to get it over with early in the day. When he entered the toy and game store, he really didn’t know what he was looking for. He walked up and down the aisles of the small shop, but couldn’t find anything that struck his fancy. Finally the shopkeeper, a jovial man in his fifties, horseshoe bald with a red pate and dramatic waxed moustache like the character from Monopoly, came over and played the part.
“What are you looking for, son?”
“A gift for my six-year-old nephew,” was the sentence that formed itself with perfect clarity, sonority and resonance in his brain. But just after the sentence was formed, he scanned ahead and found a stutter reflex embedded in the /g/ in gift. Automatically, he sought to substitute a synonym, but in this case he couldn’t even substitute the word present, because the /p/ was his nemesis, the hardest sound in the lexicon and one to be avoided at almost any cost. So he got past the opening vowel and then hit the hard /g/ like an electric fence. His larynx locked and he started pushing against it with brute force, but it wouldn’t budge. His face and neck started twitching, and his left eye was blinking out of control. The harder he pushed, the harder he jerked and twitched.[1]
Finally he caught hold of himself and let go of his breath. Inhaling anew, he substituted one sound for another. “^Ssssssomething fffffor mmmmy nephew.” It was stilted and spasmodic, but got the point across, more or less.
He could see the surprise in the storekeeper’s face, but he was used to seeing this. All his life, he had been watching people try to figure out how to respond to his twisted speaking voice.
“Well,” the man said, maintaining an amiable front, “what is your nephew like?”
The second interaction of the day, and it wasn’t going well, either. He was floundering in a neurological rut, and he couldn’t make it stop. His larynx slammed shut on its own accord, his left arm shot into the air like it was connected to an invisible string, and the muscles in his face and neck began quivering under the strain. He pulled himself together and responded slowly, too slowly, “^~I…. ^d-d-don’t know. I nnnnnever see him.”
“Hmm,” the shopkeeper tugged at his moustache. “That makes it a bit more difficult, but I’m sure we have something. Are you looking for something educational, mechanical, sports-oriented, or just plain fun?”
He shrugged his shoulders. “Sssomething he ‡can ^g-grow into.”
The paunchy man nodded sagely from behind his suspenders and his bowtie. “I’ve got just the thing,” he said, and went into the back roozm. The shopkeeper returned with a magnetic construction set, simple enough for a young boy but advanced enough for his father to enjoy as well, and handed him the box. “What do you think?”
KK nodded his appreciation and gave a thumbs-up, too taut to say anything. On other days, he might have made the effort to ask the man to gift-wrap the box, but when a day began like this, every word was precious.
“This is a gift for a nephew who lives far away?” the man deduced. “Would you like me to wrap it for you?”
Exhaling a sigh of relief for the man’s telepathy and compassion, KK nodded his head and handed him a credit card. Walking out of that toy store, he was unable to even thank the man. Cursing himself and vowing to never shop in a store again for as long as he lived – he’d shop online instead – he stuffed the gift in his backpack and started power walking through the streets.

OTHER BOOKS FROM SHERM DAVIS 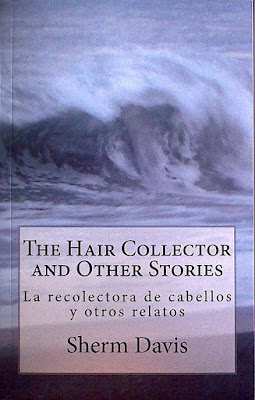 This bilingual English/Spanish collection contains pieces ranging from flash fiction to folktale. Set in New York, New & Old Mexico, Guatemala, Italy, and the future, eight morsels of Zap Fiction lead off the collection, and five longer stories close it out. The Spanish translations, the product of a team of professionals, are as true to the original English as possible.

David Howard Sherman Davis is a writer, musician and international educator who has taught in five countries on four continents. Born in Brooklyn, New York, and raised on Long Island, he currently lives by Lake Atitlán in Guatemala. His journalism and fiction have appeared in the United States, Canada, Guatemala, and online.