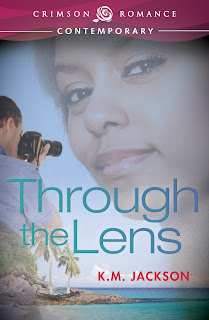 Mika Walters is a normal woman working in the not so normal world of New York Fashion. As long time assistant to uber sexy photographer Alejandro Vargas she’s tired of being the girl in the background. Just once she wants Alejandro to look at her with the same smoldering look he gives to his willowy models and now she has her chance.

After a travel mishap where the rest of the crew and the models can’t make the remote location shoot for another three days Mika is taking her moment to catch Alejandro’s eye and put herself in front of Alejandro’s camera and if all goes to plan, his bed… at least until the real world catches up with them.

Alejandro doesn’t know what’s gotten into Mika maybe it’s the sand, maybe it’s the sun, but he doesn’t really care. All he knows is that he’s finally opened his eyes and is seeing her clearly for the first time as the smart, gorgeous and incredibly irresistible woman she is.

But why can’t she realize that what he’s feeling for her is not one of his usual one, well, three night stands? This is real. Real love, real passion. What’s it going to take for him to prove to Mika that she’s the woman he wants? Now and forever.

It was then that small but capable and firm hands grabbed him by the shoulders and pulled him up to the surface.

Alejandro suddenly was face to face with a wet and snarling Mika. He blinked as her words came at him like blows from a prize fighter. What did he do to deserve this? “Don’t you see I was trying to save you now? Of all the ungrateful—” Alejandro snarled back.

“Now? Now is a little too late, if you hadn’t noticed. Any longer down there, and it would be you who needed mouth to mouth,” Mika railed cutting him off.

It was too much. She had a lot nerve to be talking to him about mouth to mouth. All she’d done lately was taunt him with that luscious mouth and her lashing tongue of hers.

He watched as Mika took in a deep breath, about to give it to him good once again when Alejandro suddenly decided it was his turn to do giving.

K.M. Jackson is a writer of women’s fiction, and a former fashion designer. She lives in the suburbs of New York with her husband, boy/ girl twins and her precocious terrier named Jack who keeps her on her toes.

Email ThisBlogThis!Share to TwitterShare to FacebookShare to Pinterest
Labels: Giveaway