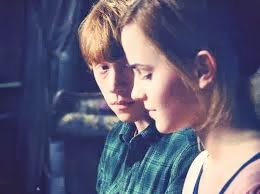 Most of them would have heard about the interview with J.K. Rowling to Emma Watson (yes, the same Hermione!).

In that interview, she said that marrying Ron to Hermione is a mistake..actually admitted that although Ron and Hermione ended up together at the end, they are not a credible couple... (WHAT???)

"I think there are fans out there who know that too and who wonder whether Ron would have really been able to make her happy," Watson responds in excerpts from the interview printed in the Sunday Times.

Rowling said she could "hear the rage and fury it might cause some fans" of her work and that she hoped she would not be "breaking people's hearts" with her revelations.

Which she truly did! (I was really shocked to hear this statement at first)

At last, she said Ron and Hermione would have needed counselling to sustain their relationship.

Is it just me or this information breaks your heart too???