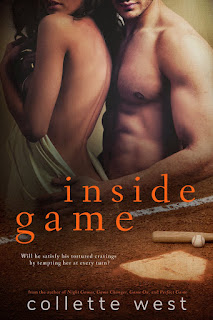 Third baseman Drake Schultz is the undisputed bad boy of the New York Kings. So it's no surprise when Major League Baseball suspends him for taking performance-enhancing drugs. Furious with their superstar, the front office issues an ultimatum: either work with their sober companion or kiss the rest of his quarter-billion-dollar contract goodbye. Cocky and arrogant, Drake resists being saddled with a live-in babysitter—even one he's insanely attracted to.

Drake is Eva Sloane's first celebrity client as a substance abuse counselor, and she knows she's in trouble when he starts tempting her at every turn. The way he looks at her is as hot as sin, but she refuses to become his new drug of choice. Slowly, she helps him realize he has to face the demons from his past and heal his tortured spirit before he can even think about satisfying any craving he has for her.

Drake, the highly paid New York Kings baseball player, got caught for taking performance-enhancing drugs.  Just when he thinks the company is going to throw him out, he was said that he is suspended and must prove himself worthy to get back on the team.  Eva was assigned to monitor him for drugs during this period.  Even though the couple already know each other for years, it has been a secret crush until now.  Sure, they didn't meet under the best of circumstances, but the readers can see how they are the perfect medicine for one another.

Another impressive romance from Collette West!  I can't say which of the couples are my favorite.  It seems like choosing ONE favorite book from my collections.  Which is impossible!  Drake and Eva started off in a more serious way with many lies and insecurities inbetween.  I am not sure who needs the other more for their life.  Both of them have so many hurts that they have to leave behind, in order to be their original selves.  The characters were just so awesome that I had to keep saying that this is a book, to stop crying.  The Kings team feels my own friends and I am happy to see every one of them back in the book.