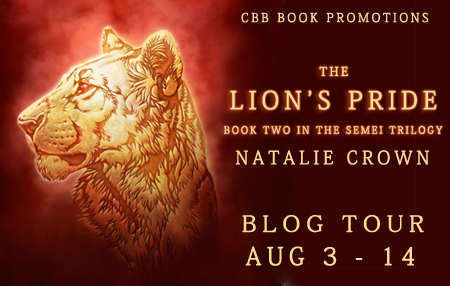 Welcome to my tour stop for The Lion's Pride by Natalie Crown!  The tour runs August 3 - 14 with reviews, author interviews, guest posts and excerpts.  This is a YA Fantasy/Alternate World book that released on August 2nd. This is the second book in the The Semei Trilogy. Check out the tour page for the full schedule.

'She is the reason your friends are dead. She should pay the price for that betrayal.'

Not long ago Kammy had led a simple existence, stuck on an island, with only her Gran and Jamie to care about. Now she knows she is half Semei and of royal blood, in possession of an item that could bring about a war that would destroy the world, and so the worlds within it. She cannot go back and, despite everything, she does not want to.But she is haunted by the man - the king - that shadows her.Bagor and his army wait. In three days he will march into Emire and he will take everything.Kammy and her friends have one hope. They must find Danorrah; a cursed city, lost to the memory of all. Bagor will hunt them, every step of the way, determined to claim the Key and to claim her. It is all well and good that Kammy does not want to go back to her old life, but she will need the blessing of the Mother if she is to elude Bagor and hang on to her new one.

Be sure to check out The Wolf's Cry, Book One of The Semei Trilogy


Jad held his breath and pushed through a wall of rolling black. The air cleared suddenly and he stumbled to a halt. He stood at the edge of the Tower Square. Here, the smoke had space to flee upwards. It loomed overhead, a brutal looking cloud, but Jad could see the destruction before him.

The tower, and the library attached to it, had been obliterated. All that remained was a shell of fire and rubble. Watchmen swarmed above it in pairs, one to carry the bucket, the other to tip it. Puffs of black smoke battled against them, but they were winning. Despite there being little to save, they were fighting.

Jad's vision cleared and his breathing steadied. He pulled his attention away from the fallen tower and the sight of the bodies that littered the ground stole his breath away again.

He wandered forwards. There was no smell of death, for the stench of burning wood was too strong, but the weight of it was something heavier than the worst sort of nightmare. This was war. This was consequence. Some had been killed by arrows, some by the smoke, but most had been crushed beneath the desperate stampede. Their lives had been taken by chaos and panic. Jad had seen death before, but not like this. It numbed his anger, it numbed everything.

The hiss and fizz of water meeting flame filled the air, the aching wood popped and groaned. There were others like him, searching for survivors, but they had each been silenced by horror. Jad knelt beside a woman with no obvious wounds and pressed two fingers to her neck. She looked like she could be sleeping, but he felt no pulse. He rested his hand on her cheek for a moment, before looking up.

He spotted a head of dark hair, covered in ash, beside the ruined tower, atop a pair of trembling shoulders that wore a familiar blue dress. The dress was ruined, but he knew it instantly. He knew it was her.

He tried to shout her name, but he could not find his voice. He choked on his relief and his joy. He ran for her, his boots scattering the fractured stone and wood across the scorched cobbles. She did not stir. Even when he dropped down beside her, she did not stir.

He gripped her shoulders and turned her, gently, to face him.

She jumped and recoiled. He thought she was going to push him away. Her eyes filled with that deep blue and he could not tell if she saw him, or if she was lost somewhere else. Her lips parted and she softened, reaching a hand towards his cheek. Her eyes dropped to his once white shirt, now grey, and she ran a hand over his chest. Jad's heart pounded.

Kammy's face crumpled and she sank back.

Jad froze. She could only mean one man.

'I couldn't find my way back,' Kammy gripped the skirt of her dress, 'I didn't know where I was.'

Had she truly seen Bagor? She must have if she thought that Bagor was...Jad jerked upright, the hairs on the back of his neck standing on end. A shiver passed through him. Was Bagor still near?

The fizz of steaming water pulled Jad back to the moment. His eyes fell to Kammy's hands and with a sickening lurch he saw the blood on her fingers, the blood that soaked the front of her dress.

Jad cupped her face, forcing her to focus on him as his heart galloped into panic. 'Kammy, where are you hurt?'

His heart punched out of his chest and he sagged forwards. Fii. Fii. He could not look away from her face, each familiar line traced with falling ash. His mouth opened in a scream that shredded his throat. He clutched at the fabric of Kammy's dress and his head dropped into her lap, but still he could not look away from Fii's body. He felt Kammy curl over him, digging her fingers into his hair.

I grew up in a village called Swilland, in the countryside of Suffolk, England. There wasn’t much around, other than farms and fields, but for the most part I loved it, and I still do. I’m a passionate person by nature. I don’t just LIKE things, I LOVE things. Whether it’s a book, a film, or a sports team. Once I decide to enjoy something, I enjoy it to the MAX.

I’m a terrible cook. I prioritise essential social media work over keeping my flat tidy, because I know best.

Onto my love of reading and, consequently, writing – it was my dad that played a big role in encouraging me to read. He didn’t push me towards books necessarily; he simply read a lot himself. Then I would pick up his books and read them after him. I was reading high and epic fantasy from a very young age. I guess that might explain why I have always loved adventure stories with magic and intrigue and princes and princesses in.

I was aware that I wanted to ‘be a writer’ from a very young age. I was convinced I would be the first best seller that hadn’t reached double figures in age yet! I wrote about the Danshees, furry creatures that lived through a mirror. I wrote about a Sand Bottle that transported a boy into a world of magic. I wrote about a sick girl finding a music boy that healed her, but transported her back in time. (Wow, I always have loved alternate universes…)

When I was eight I wrote my first novel called The Land of No Return. Despite the title, I am determined to return to it one day. I feel like I owe it to my past self. So, as you can see, I have always been writing. There have been times when I have gone weeks without scratching down a word. Then there are days where I churn out multiple chapters and only my body’s silly desire for sleep and/or food can stop me.

These days I live in North London and I love it. I work full time and London is a hectic city. Juggling work, writing and a social life is tough but nobody is forcing me to do it so I can’t complain. The dream is that writing will be my career one day but it doesn’t matter if I never quite make it. I love writing too much to ever pack it in.

I am desperate to get a dog. My mum suspects I miss my cats at home more than I miss her. I am a devout Arsenal/Ferrari/Rafael Nadal fan. I get all mad when confronted with a case of social injustice and then I get all mad when people take the fight for social justice too far. I mostly keep those thoughts to myself and simmer with rage. I watch good TV and bad TV, because I can. What I can’t do is enjoy bad books (subjective opinion of course). I just can’t.

This event was organized by CBB Book Promotions.