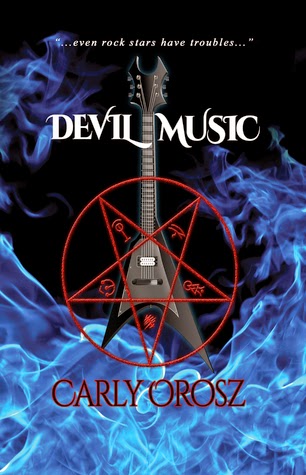 
Cain Pseudomantis leads a miserable life. Bound to the mortal world by a powerful spell no demon could hope to break, he must obey his human master’s every command or face harsh punishment. He finds solace in the rock music which he listens to when he isn’t running unsavory errands for his master. Then everything changes. While on a mission in a seedy section of 1980s Los Angeles, Cain impulsively buys an electric guitar and discovers an unusual talent for music, a talent that catapults him to hair metal stardom. With three superpowered human band mates and his beautiful girlfriend Michelle by his side, his life starts to look a lot better. But Cain soon finds that even rock stars have troubles. The crusading televangelist Nathaniel Breen—who happens to be Michelle’s father—accuses him of turning the city’s youth to Satan worship. Meanwhile a mysterious killer known only as the Engineer terrorizes the Los Angeles rock scene with a series of brutal murders. When Cain and his friends attempt to unmask the killer, they discover a deadly secret that could cost Cain his hard-won freedom, and possibly his life.

Although urban fantasy is what I would go for, when asked to choose a book, this is something I would not immediately pick up.  But, after reading this book, I don't regret even the slightest picking this up.

Cain is a demon, who is enslaved by Mr. Warwick and treated badly.  He is sent out on errands by his master, which he has no memories on, later.  He was sent out to find a girl for Warwick's son, Lance, and make her love Lance.  But, when Cain goes to LA, everything changes for his good.  He makes new friends, finds a new talent in the electric guitar and above all, he may also be liking Michelle, who is the girl he was sent to find and deliver, which he has no intention of doing.  Meanwhile, there is a serial killer on the loose, who targets young men involved with music.  Cain and his friends need to find the killer before he draws close to any of them.

It was a big read, but a good read!  Interesting premise!  Wild and different characters!  You couldn't make a demon more interesting than this.  Yeah, at first I had my doubts.  How can a demon be so spineless?  But, there was some past involved in this as well.  He was trained to be like a dog, just to do his master's bidding that he became fearful to show his feelings at anything.  But, as he becomes free of his master's control, his real strength began to show.  And there were so many different side characters that are interesting to read.  There could be more on Cain's past, which would have helped for better understanding.

The killer's premise was also brought on well.  The suspense went hand in hand with fantasy and it worked too.  Although you will be able to guess who the killer is, after some time, it still will not stop you from reading more.

There are some unanswered questions, but I suppose that this is a series, so it doesn't end here.

Interesting and recommended read for someone who wishes to try something different!