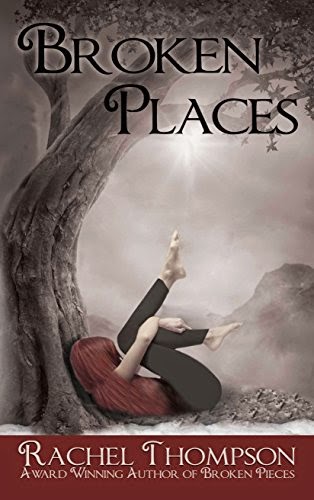 Award-winning author Rachel Thompson courageously confronts the topics of sexual abuse and suicide, love and healing, in her second nonfiction book of prose: Broken Places. The sequel to Rachel’s first nonfiction book, Broken Pieces, Rachel bares her soul in essays, poems and prose, addressing life’s most difficult topics with honesty. As you follow one woman’s journey through the dark and into the light, you will find yourself forever changed. Rachel’s first book in this series, Broken Pieces, has been a #1 best seller on Amazon (eBooks) on Women’s Poetry and Abuse. Please note: this book discusses serious topics, and is intended for mature audiences only.


I don’t forgive my abuser. Not because I’m angry or because I’m not healed (which is a process anyway). It’s simple really—as a survivor, I’m in charge of my recovery, not you. Not her. Not him. I don’t have to do what you tell me. Just because you tell me that in order to heal I have to forgive the man who invaded my body when I was eleven years old, I don’t have to agree with you.
Besides, why must I take action for something that wasn’t my fault to begin with? I’ve taken on enough already.
It’s extremely personal, it’s my business, and I flat-out reject the notion that in order to heal I have to forgive him. In fact, it’s not anyone’s business but my own whether I forgive anyone for anything! Yet, survivors are constantly asked if we forgive our abusers. Why?
Asking a survivor of something so invasive as sexual abuse of any kind (but particularly of something that happened to us as children), if we are able to grant grace to someone for something so egregious, unlawful, and horrific, something that filled us so deeply with confusion and anger and shame—I find to be almost as invasive. It again puts the onus on the victim of the crime to DO something, when we were not at fault to begin with.
There’s also a pervasive religious dogma in our culture that is thrust upon us—an assumption that healing cannot begin or move to completion without forgiving the monster. This often comes from clergy or non-survivors, which reeks of hypocrisy, like a truck driver instructing a brain surgeon.

Survivors each walk their own path, and many will share their stories of recovery, which may or may not include forgiveness. One friend (a single mom) tells of being forced to continue to work in an office with the man who raped her because her bosses told her she’d be fired if she reported his crime. Not only that, but she was told to forgive him in front of her superiors as well as HR, so it would go on record that she would not be pressing charges.
After a failed suicide attempt, she quit her job, brought charges against both him and the company, and is now working as a freelance artist. She’s not angry anymore, but also says she’ll never forgive him or the company for the emotional damage.

Do It Only For You

Another survivor friend (who is religious) shares that she forgave her abuser because it helps her get through the day. She didn’t want to carry the guilt and shame anymore, so by forgiving him, she let all that go. Forgiving him helped her forgive herself, and that’s the only reason she was able to get to that point.
In fact, part of her recovery is group therapy with recovering pedophiles. I have the ultimate respect for her for being open to that. That’s not something I feel I could do.

Or Don’t Do It At All

Many therapists will tell you that forgiveness is not a required step to healing, despite what religious leaders will tell you. For me, religion has no place in my personal recovery. I am a spiritual person, but I rejected organized religion long ago. It doesn’t mean I don’t pray or believe in certain things—it also doesn’t mean I don’t believe in forgiveness as a general rule.

Her three books, A Walk In The Snark, The Mancode: Exposed and Broken Pieces are all #1 Kindle bestsellers! Midwest Book Review and two Amazon Top 10 Hall of Fame reviewers all gave Broken Pieces five stars!

She hates walks in the rain, running out of coffee, and coconut.