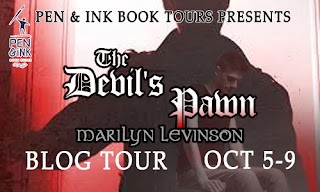 Welcome to my tour stop for "The Devil's Pawn" by Marilyn Levinson.  The full tour schedule can be seen here.

ABOUT THE DEVIL'S PAWN: 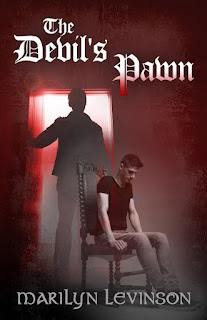 After fifteen-year-old Simon Porte’s family is killed in an automobile crash, his father’s brother whom he’s never met brings Simon to live with him and his wife in upstate New York. Simon doesn’t trust Uncle Raymond, and for good reason. Raymond is dying and using his powers to take over Simon’s body. Simon and his allies—his dotty great-aunt Lucinda, his sister whom he finds living with another relative, and a pair of odd twins—wage war against the evil Raymond and his cronies. 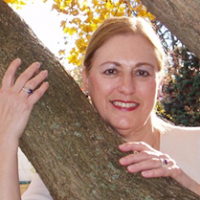 A former Spanish teacher, Marilyn Levinson writes novels for kids and mysteries for adults. Some of her books for young readers are AND DON’T BRING JEREMY, which was a nominee for six state awards, NO BOYS ALLOWED, and RUFUS AND MAGIC RUN AMOK, an International Reading Association-Children’s Book Council “Children’s Choice.” RUFUS AND THE WITCH’S SLAVE, will be out in the fall. Marilyn like traveling, foreign films, reading, knitting, Sudoku, dining out, and talking to her granddaughter Olivia on Face Time. She lives on Long Island.

A witch! I stared at my great-aunt’s front door, and told myself Lucinda wasn’t a witch. There were no such creatures, at least not in the fairy tale way! I pulled back my shoulders and, not seeing a bell, knocked.
She stood in the doorway, her bright blue eyes raking me up and down like cat’s claws. “Clever boy, you found your way.”
My heart leaped into my mouth, and I turned to run. My aunt’s cackle chased after me.
“Don’t be afraid. I’m your great-aunt Lucinda, and I’ve things to tell you. Come along, Gregory.” She spun around and walked through the cozy sitting room, not waiting to see if I was following.
“My name’s Simon,” I said when we stopped in the kitchen at the back of the house. “Don’t call me Gregory.”
“That’s what they named you when you were born,” Lucinda said. She pointed to the table against the kitchen wall, and I sat down. “I should know. I saw you when you were five minutes old.”
“You did?”
I stared at Lucinda, but she was pulling a dish from the oven. I became aware of the delicious aroma wafting through the small house.
“Apple crumb cake,” she announced, setting it on top of the stove. “I hope you’ve room for a piece or two, after everything you scarfed down at your friends’ house.”
“Well, sure. I’d love a piece, but how did you know—?”
“I know lots of things, Gregory, most of which I wish I could erase from my mind for the pain they cause.”
“Please don’t call me Gregory. He calls me that.”
“Your uncle Raymond.” Lucinda grimaced. “He’s some piece of work, isn’t he?”
“He took me in. I’m grateful for that.”
“He did it for his sake, not yours.” She let loose a cackle of laughter. “Raymond only does what serves Raymond. He’s evil through and through.” 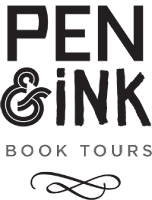