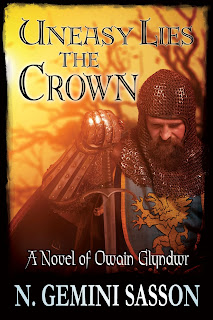 For centuries, the bards have sung of King Arthur’s return,
but is this reluctant warrior prince the answer to those prophecies?

In the year 1399, Welsh nobleman Owain Glyndwr is living out a peaceful gentleman’s life in the Dee Valley of Wales with his wife Margaret and their eleven children. But when Henry of Bolingbroke, the Duke of Lancaster, usurps the throne of England from his cousin Richard II, that tranquility is forever shattered. What starts as a feud with a neighboring English lord over a strip of land evolves into something greater—a fight for the very independence of Wales.

Leading his crude army of Welshmen against armor-clad columns of English, Owain wins key victories over his enemies. After a harrowing encounter on the misty slopes of Cadair Idris, the English knight Harry Hotspur offers Owain a pact he cannot resist.

Peace, however, comes with a price. As tragedies mount, Owain questions whether he can find the strength within himself not only to challenge the most powerful monarch of his time, but to fulfill the prophecies and lead his people to freedom without destroying those around him.


Owain leaned against the bedpost, gazing at Margaret, who was swept away in a sea of exhaustion. For a long time he studied her, worshipful of her, thankful and yet gripped with a fear that paralyzed him. Lamplight flickered upon her face, pale and sparkling with perspiration like a fine dusting of crystal. He glanced at the physician, who was packing his instruments and washing his hands as if there were nothing more he could do.

His voice tremulous, Owain probed, “Will she... will she be well soon?”

“More likely so than not,” the physician said. He was a Jew named Abraham that Owain had brought to Sycharth from London to attend to his large family. He wiped his hands on a cloth and then gathered the bag that contained his mysterious tools. “But there were complications. If she were to deliver another child, she could die. Do you understand?”

The strong cries of his new son and daughter filled his ears with the assurance that they had gained their place in the world and were not letting go.

Owain nodded dully. Then he knelt beside his love and wrapped his large hands around one of hers. He kissed her knuckles, and then pressed them to his whiskered cheek. “Marged, the children need you. I need you.” And he buried his face in the sea of down coverings that surrounded her and wept more tears than he had ever in his life shed.

N. Gemini Sasson is the author of six historical novels set in 14th and 15th century Scotland, England and Wales, including The Bruce Trilogy and Isabeau, A Novel of Queen Isabella and Sir Roger Mortimer (2011 IPPY Silver Medalist in Historical Fiction). Her latest release is Uneasy Lies the Crown, A Novel of Owain Glyndwr. Long after writing about Robert the Bruce and Queen Isabella, Sasson learned she is a descendant of both.