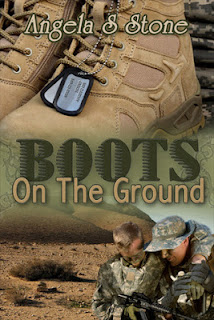 Ash Cooper and Jason McCarty know they need to do one thing, and one thing alone: stay alive.
An IED attack destroyed their convoy and left them both injured in the high desert of Afghanistan and running from insurgents. They take refuge with a group of Afghan civilians, and their only hope of rescue is two satellite phones that might be damaged beyond repair.
Ash and Jason join forces with a British army nurse to survive the harsh living conditions. As days to turn to weeks, they think of home, the husbands they left behind, and the lives they want to return to.
But with food rations running short, the elders angry at them, and the hope of rescue lost, Ash and Jason start to give up, and in the end turn to each other in their struggle for survival.

The concussive force of the blast blew Ash backwards out of his seat. He could feel the armored vehicle turning end over end. It took him a moment to grasp the car had stopped. He felt dizzy and disorientated, blinking a couple of times.
Where in the heck was he?
The dust of the desert started to settle, and he remembered. Civilian police, Afghanistan, patrol convoy, IED.
He started to move only to bite back a hiss of pain. His shoulder flared with agony. Motherfucker. He couldn’t tell what happened to his arm, but it hurt like a son of a bitch.
His escort and their translator were the other people in the armored vehicle, and they were still and silent. Ash cradled his arm as he started to move, his training helping him to squelch the pain. They were in one of the most volatile and insurgent-ridden districts of Afghanistan. The IED blast had to have been huge to send their armored vehicle flying, especially one five cars from the lead.
Ash glanced though the broken windshield. The force had blown them back and clear of the debris field. There were four vehicles up ahead, all burning or smoking. Ash checked again for signs of life in the other passengers around him.
He found none.

Angela S Stone is a twenty something Registered Nurse living, and working in Ottawa Canada. Her first novel, Sometimes It’s Fate, was published by Phaze books in 2011. Angela finds inspiration in real life personal events for her books, often writing about issues and she is a proud Canadian and an even prouder girl from back east. She thoroughly enjoys writing novels featuring character that live in or are from the Maritimes. She’s recently met Mr. Right and when she’s not occupied with him she can be found hanging out at her local Starbucks writing. She spends her free time advocating for minorities and persons with disabilities.
Angela has a severe learning disability called Dysgraphia. Despite this she has written several novels, graduated from university will be starting her Master’s degree in nursing. All things she was told she would never be able to do.
Angela has never met a challenge that she couldn’t overcome. She believes strongly in the philosophy of saying “I can’t” means “I won’t” and advocating for yourself. She has spoken about these topics on provincial, regional and national levels. As well has published several articles in related disability orientated magazines.
AUTHOR ONLINE:

Giveaway is open INTERNATIONALLY!  To enter this giveaway, all you have to do is COMMENT in this post!