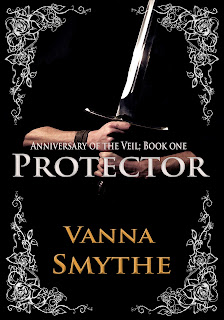 Kiyarran just wanted to become a Protector of the Realm, a member of an elite order of fighters. Strange and powerful magical abilities awaken inside him once his wish comes true. The Priesthood that secretly controls the realm see his skill as a threat, and Kiyarran begins to learn that little about life as a Protector is what he thought it would be. To top it off, Kiyarran is falling in love with Princess Issiyanna, his friend of many years.

Issiyanna faces and arranged marriage, but she has been dreaming of another man, her one true love. Now her long gone mother is calling to her, promising she will return and take Issiyanna to meet the man from her dreams.

The world is split in half by a barrier called the Veil. A terrible sacrifice was made to put it in place and now, as the 1000th Anniversary of the Veil draws near, a second sacrifice is called for to keep it in place.

Both Kiyarran and Issiyanna are needed for the Anniversary. Even though they only just learned of the Veil and neither know the role they must play …

All books contain symbols, which are the things that really create that emotional connection between the reader and the story. I have woven several such symbols into the story of my Anniversary of the Veil series, the most important ones being those for Love, Friendship and Life. And they are…

My two main characters, Kae and Issa, have been best friends for years, but once Kae finally becomes a fully pledged Protector he finds himself falling deeply in love with Issa.  White winter roses, Issa’s favorite flower, symbolize this love. White winter roses are also the flowers Kae’s long dead father would make out of cloth in the dead of winter and leave for Kae’s mother to find.

Throughout the story of Protector and the rest of the Anniversary of the Veil Series, the theme of strong friendship between Issa and Kae is one of the most prevalent ones.  This deep friendship they share is symbolized by wind.  Strong gusts of wind blow off the Taiel Sea that borders the capital city. The gusts are so strong that you can lean right into them when standing on the edge of a cliff and you will not fall.

Kae and Issa did this as children, playing on the cliffs that line the shore of the Taiel Sea. Issa is forever afraid that the wind will fail, that the gust will not be strong enough to prevent them from falling into the raging waves.  But the wind never fails, just as their friendship is stronger than anything else.

Life Symbolized by the River

In the world of Protector, the energy of life, the Life Force, flows through all living beings, yet the flow is stronger in some than in others. This flow is like a river, raging in some, barely a stream in others. The ones in whom the flow is strong can manipulate the Life Force, use it to perform a sort of magic that allows them to be in two places at once, feel other people’s emotions, even read their thoughts.

The flow of the Life Force can also be released from certain people, its flow channeled to right a wrong in the world.

The author is giving away e-copies of her book - Protector (Anniversary of the Veil #1) - to THREE winners of the Rafflecopter giveaway.