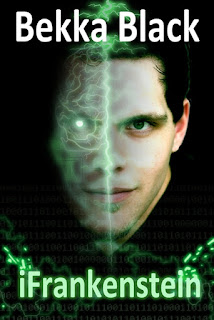 Frankenstein comes to life for the wired generation.

Homeschooled teenager Victor Frankenstein is determined to write his own ticket to independence: a chatbot to win the prestigious Turing prize and admission to the high tech university of his choice. He codes his creation with a self-extending version of his own online personality and unleashes it upon the internet. But soon he begins to suspect his virtual clone may have developed its own goals, and they are not aligned with Victor’s. The creature has its own plan, fed by a growing desire to win darker and more precious prizes: unfettered power and release from loneliness.

As the creature’s power and sentience grows and its increasingly terrible deeds bleed over from the online world into the real one, Victor must stop his creation before his friends and humanity pay the ultimate price.


COME BACK TOMORROW FOR MY REVIEW OF iFrankenstein

How did I write iFrankenstein? Here’s the skinny:

When I decided to write iFrankenstein, sequel iDrakula, I was under contract for another book. I figured I could stall that editor for a month or so. Not a lot of time. So, I instructed my husband to slip flat food under the door for me to eat, locked myself in my bedroom, and wrote like fury.

Writing the iMonsters books is very different from my traditional books, the Hannah Vogel mystery series and the Order of the Sanguines gothic thriller series with James Rollins. When you tell a story using only text messages, web browsers, emails, and tweets, your tools are very different. I can’t have descriptive passages. I can’t show a character’s innermost thoughts. And I don’t have 100,000 words or 500 pages to play with.

Some things are the same. Text messages are dialogue, just like in print books and screenplays. The language is a bit different, but I don’t want to push it too far and confuse the non-die-hard texters, so I keep it simple and only use text abbreviations that are in common use.

For longer passages, all I have are emails. Emails can be a bit more descriptive than text messages. I gave that Victor Frankenstein a strong descriptive style. It couldn’t be flowery and Victorian, like the original Victor, but he could describe a few things and he also texts off photos so readers can see key locations. Elizabeth Lavenza doesn’t spend as much time emailing—she mostly communicates with texts and by texting paintings that describe how she feels, a habit that just might save her life. Henry Clerval doesn’t use pictures, only words, but he’s good with them. V.V (the monster) uses all forms of electronic communication—he’s a natural (or an unnatural).

Once I had the characters communicating with each other, I started to think about what they were thinking. How could I show that? The same as in a screenplay: by showing what they were doing. But, since I couldn’t film them, I could only show what they were doing online. Web browsers help to convey thoughts. When Elizabeth visits a web page marked “Worst First Kiss Stories,” you know things didn’t go well with Victor that evening.

Those were the tools I gave myself to write the book and it was tremendous fun working within those constraints. I hope that readers have as much fun coming along on this journey as I did mapping it out!

After a childhood often spent without electricy and running water, Bekka escaped the beautiful wilderness of Talkeetna, Alaska for indoor plumbing and 24/7 electricity in Berlin, Germany. Used to the cushy lifestyle, she discovered the Internet in college and has been wasting time on it ever since (when not frittering away her time on her iPhone). Somehow, she manages to write novels, including the award-winning Hannah Vogel mystery series set, in all places, 1930s Berlin, and The Blood Gospel series (with James Rollins).

She lives in Berlin with her husband, son, two cats, and too many geckoes to count. iDrakula is her first cell phone novel.