Before moving on to the cast for "Rose", here is something little about the book. 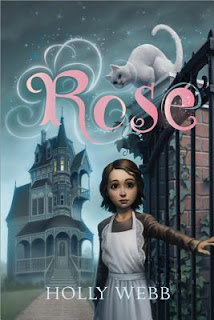 Rose isn't like the other orphans at St Bridget's Home for Abandoned Girls. Instead of dreaming of getting adopted by loving, wealthy parents, Rose wants to get a job and be independent. She doesn't need anyone but herself. She finds her escape working as a maid for Mr. Fountain, an alchemist. Unable to ignore the magic that flows throughout the grand residence, Rose realizes that just maybe; she might have a little bit of magic in her too. This new series featuring magicians, witches, talking cats, mist-monsters, and friendships will have young readers in a trance!

Now, we can enjoy the guest post from Holly!

This is so difficult! Rose needs to be brave, determined, but quite matter-of-fact. She’s horrified by her magic at first, as she wants to be a maid – she’s amazed that she’s been lucky enough to get a job, and she thinks the magic will spoil everything. So whoever played her would need to be able to get that determination across, but be overtaken by the excitement of the magic growing inside her.

At first I thought of Kirsten Dunst, as she was amazing as a child vampire in Interview With the Vampire, but of course that was years and years ago. Actually, if I could have any child actress from whenever, I think I would go for Mara Wilson, who played Matilda in the film. She seemed quite as I imagine Rose – pretty, but not beautiful, very sensible, but with a sly sense of humour lurking underneath. I wonder if Chloe Moretz (Diary of a Wimpy Kid, Hugo) would be able to look young enough to play Rose? In the book Rose thinks she’s ten, but she’s not quite sure, and the hard life at the orphanage, and having to be grown-up very quickly, would make her look older.

But only if he could grow a large, curly moustache.

Miss Sparrow needs to be very beautiful, possibly too beautiful – not to spoil the plot, but her looks are magically enhanced. I’d love to see Emma Watson play another magical character, but this time, an evil one. (Thinking about it, Emma Watson would also have been wonderful as Rose!)

Bill is another of the servants at Mr Fountain’s house. He’s an orphan too, and he loves being a little bit older and more used to working than Rose. But he’s actually very kind, although he does his best to hide it. He needs to sound like a Londoner, which I think is probably easier for a British actor. But then I can see Asa Butterfield as Freddie, the snotty, conceited magician’s apprentice, too! He has a magical look to him. Can I have him twice with different-coloured hair, please?!

Because he has a lovely voice!

Gus is Mr Fountain’s spoilt white cat, and one of the first magical things to happen to Rose is that she realises she can hear him talking. He’s proud, lazy and obsessed with fishpaste sandwiches.

I first saw Alan Rickman in Truly, Madly, Deeply a long time ago but he can also be fabulously nasty (as the sheriff of Nottingham and of course as Snape in the Harry Potter films).  He’s great at sounding grumpy, which is very important for Gus!

Thank you for the post, Holly!  I really enjoyed it and can picture the characters better now!