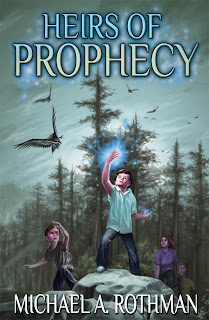 The Riverton family had been enjoying a simple summer vacation when, through a fluke of nature, they found themselves in a strange new land.

The Riverton brothers quickly realize that in this world, they have gained unusual powers. Powers that their parents fear will attract the attention of Azazel himself – the merciless wizard who brutally controls this world.

The two brothers soon learn that an ancient prophecy has finally been initiated by their arrival in Trimoria. As the heirs of this prophecy, they are destined to lead the armies of men, dwarves, elves, and even a misfit ogre against the prophesied demon horde.

Only one thing stands in their way.

The evil wizard who has learned of their presence, and has sent assassins to wipe them from existence.

A DAY WITH MY PROTAGONIST


"A day with Ryan and Aaron Riverton"

Since there are two main protagonists in the novels that are brothers, it is hard to separate them.

A typical day in Ryan and Aaron's life in the beginning of the first book is going to be one which starts in the modern world that we are all very familiar with.

They are students who are relatively young, 14 and 12 years old respectively. They grudgingly wake up in the morning to attend school, they are both bright and do well in their subjects, though Ryan has a much more subdued and quiet personality, while Aaron is a bit more brash and boisterous. After school, they both attend regular Karate lessons - in which they both excel. They have been in Karate since they could barely walk, and the martial arts are now somewhat second nature to them.

Ryan also is one of those people who is musically inclined, though it has yet to be shown in this novel - I promise there will be a moment in the series that it does come into play. Aaron has shown a lot of natural talent for sports while in school and while Ryan prefers to curl up with a good book, Aaron is very interested in risking his neck doing dangerous things that stretches his physical abilities.  Both of these traits serve them well as the novel transports them into a new world that involves, warriors and wizards.

In the land of Trimoria, I do not want to give too much away, but Ryan does follow a path which leads to his strong suit, which is a preternatural disposition for wizardly powers. He loves to study the art, though finds some of the practice that he is forced to undergo tedious at best.  Aaron, after learning that his strength has multiplied many times over in this new world, delights in the knowledge that he will follow a path which lets him practice more with the swords and the traditional uber-warrior facilities that he has at his disposal.

As far as a typical day in the author's life - that is truly a mundane and boring thing. As some might now, I am an engineer by trade. My day usually starts early in the morning, before any sane person would will themselves to normally wake and I write. I usually write for a couple of hours in the morning, every day. Afterwards, I trudge along and enjoy my mainstay of engineering work that I do on a day-to-day basis. On a day off, I might enjoy relaxing with the family, fishing with the kids, or cooking something elaborate that I hadn't done before. Yes, I am a recovering chef.

I suppose if I were to relate most to another characters in the first book, it would certainly be Jared. My wife assures me that my personality has definitely leaked into that character, so once you read the book, you'll get an appreciation for who and what I am.

That being said, I am a big believer in children's education. As a parent, I feel it is our duty to understand the abilities our children have and strive to get them to achieve to their capabilities. Oftentimes I find people who approach things with a hands-off attitude toward their child's education and end up with someone who doesn't learn the meaning of real work or real study habits. You can imagine if a child's goal ends up being higher education, those children are oftentimes not prepared - at least that is my personal observation.

You can imagine that my children might seem harried and under the onslaught that is my eye of Sauron. Not really. It is simply setting expectations and not allowing there to be excuses. Once rules are set that are known to be attainable by the children, and they KNOW that for them to get what they want, they must achieve those goals. Children are resilient and strive to meet the challenge. Or at least I can say that of my children.  I might even say they might become good little warriors or wizards if they ever were faced with a trip to Trimoria.  :-)

I hope that has given you a little insight into the characters and myself.

I am an Army brat and the first person in my family to be born in the United States. This heavily influenced my youth by instilling a love of reading and a burning curiosity about the world and all of the things within it. As an adult, my love of travel allowed me to explore many unimaginable locations. I participated in many adventures and documented them in what will be a series of books, the first of which you have just read.

Some might put these books in the Fantasy genre, and I never had issues with this label. After all, the adventures were, without any doubt in my mind, fantastic. I simply quibble with the label of “Fiction” that some might put on these tales. These tales should be viewed as historical records, more along the lines of a documentary.

I’ve learned one thing over the years. Magic is real. Keep exploring, and you too will find your magic.

Michael will be awarding a $50 Amazon GC to one randomly drawn commenter during the tour, and a $25 Amazon GC to the host with the most comments.

To enter this awesome giveaway, all you have to do is comment in this post WITH YOUR E-MAIL ID.  Anonymous and Name/URL comments without email IDs will not be considered for giveaway.  So, please leave your e-mail ID in the comment. 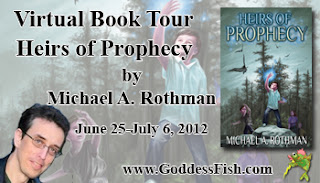