Giveaway and excerpt of "KISS ME QUICK BEFORE I SHOOT" 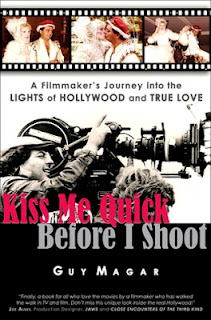 Kiss Me Quick Before I Shoot is a memoir about magic...the magic of making movies and the magic of finding true love.

Movie lovers will discover what it would be like to work in the dream factory, to be a film director, to have an inside peek at Hollywood s inner workings making movies and TV shows. This memoir brings to life the many personalities and stars encountered, and tells the hilarious stories on the rocky road to Hollywood success.

With production work spanning over 100 credits from shorts to TV shows to feature films, Guy Magar s behind-the-scenes stories range from his first producer turning out to be a Mafia assassin, to shooting in Egypt for the original series Battlestar Galactica, to almost decapitating a young Drew Barrymore after ET, and to almost derailing James Cameron s career (or slowing it down as he proved way too talented for anyone to alter his storied destiny.) This memoir is about living the great American dream, an immigrant s dream to make movies in Hollywood.

” Kiss me quick before I shoot has been my welcoming catchphrase to my wife Jacqui whenever she visited on-set, seemingly always just before I rolled cameras.” And so this book is also about a deeper magic, the magic of finding a life partner.

Jacqui and I were married in a beautifully costumed Renaissance-themed wedding. I got to duel in a sword fight to win her hand against hooligans (stuntmen friends) who kidnapped her after she arrived by horse and buggy in front of 300 surprised guests. It was a magical wedding and my Errol Flynn life moment! Now, 28 years later, I am still head-over-heels in love with Jacqui.

But then, suddenly, Jacqui was diagnosed with leukemia. I immediately moved into the role of caregiver, and my entire 24-hour life focus became Jacqui s healing. We discovered the medical mecca of the City of Hope where we met a world-class gifted doctor who welcomed Jacqui to join their national stem cells trial. We locked up our house, boarded the dog, and moved in to start Jacqui s curative journey back to health.

DARE TO DREAM! As an immigrant I had Hollywood dreams to become a director and I did...I dreamed of finding true love and I did at 34...and when Jacqui got ill, I dreamed we would find a way to heal her, and we did. People love stories about making dreams come true. I dared to dream!

This passionate, life-celebrating memoir embraces both love and work within entertaining stories of what it s like to live this dream. Join me on a wild and thrilling rollercoaster ride of a Hollywood film career, of the intoxicating highs of finding and sharing true love, and of the sweet triumph of survival and healing…all rolled into one magical journey!


Written by Guy Magar – From his memoir KISS ME QUICK BEFORE I SHOOT: A Filmmaker’s Journey into the Lights of Hollywood and True Love

I’m not a fan of traditional weddings. They never quite seem the joyous occasion they’re meant to be. The bride and groom always look nervous and uncomfortable in their tight wedding outfits and brand-new achy shoes. It’s supposed to be the most special and happiest day of your life. To stand or kneel silently for long stretches while a cleric is going on and on with the same crappy speech they give at every boring wedding is not my idea of a great wedding day. I mentioned to Jacqui that same evening I proposed in Jamaica that I did not want a formal wedding, nothing traditional, and wished to do something more romantic, more unique, more fun.

“So, you’ve been thinking about this for a while, huh?” she teased.

“Well, uh, yeah, kinda…it’s been percolating,” I said, trying not to sound too prepared.

“I gave it some thought, and uh…I thought we’d do…a period wedding,” I finally blurted.

She looked perplexed, but intrigued. “And what time period were you thinkin’ about?”

I wasn’t sure how this was going to sound, but I decided to just go for it. “A romantic time period…you know…with harpists and costumed dancers and jugglers, and a horse and buggy to bring you in, and hooligans to kidnap you in front of our guests, and you screamin’ for help, and a knight in shining armor to rescue you, and sword fights and duels and…” I stopped as it sounded too huge even to me, like a blockbuster movie. She looked a little baffled. Well, more than a little.

“And this little epic you’ve been directing in your head, what period is it from exactly?” she inquired.

“The Renaissance. I see it as a romantic and joyful Renaissance wedding.” I said, not too sure as it now sounded too grandiose.

She smiled, and with no hesitation, she said, “Wow! Sounds amazing! What a great idea. Let’s do it!”

A Renaissance wedding? It took three months of work and was as intricate to put together as any film production. I turned down job offers during that time just to stay focused. About 30 minutes northwest of Los Angeles, we found a beautiful park next to a lake in Agoura Hills, that was surrounded by pristine trees and featured a ballroom cabin where you could feed 300 guests. This fabulous place is located a mile away from the site of the annual Renaissance Fair. We attended the fair itself a few weeks before our late-June wedding and hired a Renaissance dance troupe, complete with costumes and period musical instruments, and a terrific comedy juggling team to entertain our guests.

Jacqui used her brilliant talents and creative styling to design our costumes from scratch. She created an amazing period dress with brocade panels and row after row of pearls, and made a stunning head-piece with more pearls. She looked like she had walked right out of a fantasy romance novel. She was a vision, my lucky vision. All I needed was to rent knee-high boots and a princely jeweled hat. We went for the whole show!

We wanted to have a dramatic entrance and considered landing in a balloon on a field right in the middle of our guests. After talking to balloonists, I discovered they can’t guarantee landing anywhere near a precise spot, or even a precise county! Wind factors of the day rule that world. We went ballooning soon after the wedding and indeed discovered the complete zaniness of the experience. It is customary to have a “celebration party” after every landing—to celebrate living through it! For me, it was terrifying. You see the squares: squares—just like from airplanes!

Choosing a safer route for our wedding, we went back to the original idea of having a horse-and-buggy bring in Jacqui. The colorful dancers surrounded the carriage and showered it with flower petals, to the sounds of British Royal trumpet music blaring from huge speakers. The trumpet theme that announces the arrival of the Queen of England outside Buckingham Palace—those trumpets. It was goose bumps time.

Though we’d sent out Renaissance-style invitations complete with Shakespearean Romeo and Juliet verse, “Did my heart love till now? Forswear it sight! For I ne’er saw true beauty till this night,” our guests were still quite surprised by the colorful theatrics. Once the breathtaking Jacqui arrived and got off the flowered carriage in the middle of 300 open-mouthed guests, four “scoundrels” in costume regalia unsheathed their swords, grabbed Jacqui (who feigned a helpless maiden), and announced they were kidnapping the bride. Hey, it’s a once a lifetime event!

“Unhand that woman for she is mine!” The hooligans froze in their tracks when my booming voice erupted. The hero had arrived. Everyone applauded. I exchanged nasty words with the scoundrels, and then we drew swords. It was a riot. I had rehearsed this blazing sword fight with my actor/stuntmen buddies the day before; now, with adrenaline pumping in front of 300 guests, we almost killed each other! Thankfully they remembered it was my wedding day and the plot was for me to win the maiden’s hand. I rescued my princess just like in the movies.

The wedding came off as magnificently as we had anticipated months earlier in Jamaica. During the ceremony, Jacqui and I spoke to each other as much as Jerry (the rabbi) talked, plus we laughed and hugged and kissed and made sure to enjoy every moment of our profoundly romantic Renaissance wedding. We had done it all, just as we dreamed, in a relaxed, non-traditional manner. It was our magical day. Friends still mention it as the most unique and colorful wedding they’ve ever attended.

I heard that famous chef Wolfgang Puck spent a million dollars on his Medieval-themed wedding in Europe. I love your cooking, Wolfgang, but how many guys did you duel for your bride? A salute.

I got to be Errol Flynn! I got to marry my princess!

The author is giving away a copy of this novel in electronic format to a winner of the Rafflecopter giveaway.