Grand Prize Giveaway and Guest Post on "Characters--Real or Imagined?"

People often ask me if any of my characters are based off of people I know. My answer is always the same: Sometimes.

Then I leave it at that.

But when it comes to Greg's character in The Reluctant Bachelorette, I'm not so tight-lipped. He was inspired by one of my husband's best friends--also named Greg. And let me tell you, he asked for it. From the day real-Greg found out I published my first novel, he wanted to know when I'd write a book with him as the main character. The tall, dark, handsome guy that girls swoon over. Because of course, that's who he would be.

So what did I do? I wrote him in as Greg Jones--one of the bachelors who wore wrinkled shirts, argued over a couple of bucks, loved yard sales, and is obsessed with Neil Diamond. Which, by the way, is all true. Although, since he married his adorable wife several years ago, I'm happy to report that his shirts are now ironed. (BTW, Greg is also hilarious, smart, thoughtful, and athletic--I just didn't choose to focus on that in my book.)

So, what do you say? Anyone else want me to write them in as a character? :)

Rachael Anderson is the author of four contemporary romances: Divinely Designed, Luck of the Draw, Minor Adjustments, and The Reluctant Bachelorette. She's the mother of four, can't sing, doesn't dance, and despises tragedies. But she recently figured out how yeast works and can now make homemade bread, which she is really good at eating.

Before announcing a grand giveaway, here is the blurb of Rachael's new release, THE RELUCTANT BACHELORETTE! 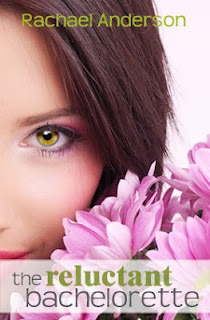 Unknowingly cast as the bachelorette for her town’s charity event, Taycee Emerson wants out. Especially when she discovers her old teenage crush, Luke Carney, is one of the bachelors and it's up to the viewers--not her--to decide which bachelors stay or go.

Coerced into participating, Taycee does what any self-preserving girl would do. She launches a subtle attack on Luke’s good name with the hope of getting him voted off the show. Unfortunately, Luke's an eye-for-an-eye kind of guy, and when he discovers what she's up to, it means revenge.

But when their pranks go south, will they screw up any chance they have at a future together, or will they be able to forgive and forget and prove that love really does conquer all?