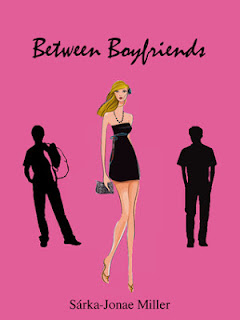 Jan Weston is boy crazy, emphasis on crazy, but when "the one" breaks her heart she vows to change. Jan quits dating and takes a hard look at herself, discovering that she does not like the flawed, spoiled individual she sees in the mirror.

Her progress toward positive change is derailed when her mother discovers she dropped out of San Diego State University to attend massage therapy school. Furious at being lied to, Mrs. Weston cuts Jan off. Now Jan is without a guy, her American Express card, and a way to pay for school. She has to do something so despicable, so vile, so cruel, she almost cannot imagine it: Jan has to get a job.

But maybe that is exactly what she needs? Jan is forced to change how she treats people and to reconsider her values. Through a "comedy of errors" and with the support of her real friends (plus the hottie from massage school) Jan is able to survive, barely. But can she really change or is she just between boyfriends?

Jan is a rich and spoiled girl, who quits her college to join massage school (without her mother's knowledge).  She just got dumped by her boyfriend -- again.  Tired of the opposite gender, Jan decides not to date again - ever.  To a girl who has always had boyfriends, this is going to be a big feat.  Her mother who has been paying her bills so far, disowns her, as soon as she knows that Jan had dropped out of college.  Financially helpless, for the first time in her life, Jan has to worry about money, paying bills and rents.  Money and boyfriends define Jan.  What is Jan going to do without both of them?  Or is there much more to Jan than these two?

This chick-lit novel surprised me.  Although started slow at first, the novel picked up speed soon.  Jan's character is someone who you can relate to, partially.  Her friends, Lisa, Nichole and Becki's characters were all brought out very well, that I enjoyed their roles in Jan's life, much than Jan's life itself.

The snarky dialogues made me laugh and that's what I love in a chick-lit and it was delivered perfectly.  The characters are well formed.  Jan's changes in attitude and life through a comedy of errors is well thought out and also delivered in a humourous way.  Here is a heroine you won't like, but would appreciate to know the story of.  Interesting read!

There are typo issues in the novel - which at times affect the mood of the story.

A coming of age novel narrated with humor!  Recommended for lovers of chick-lit novels.

Favorite Quotes from "Between Boyfriends"

She was a die-hard health nut and a part-time vegetarian who exercised regularly, ate fruits and vegetable regularly, and unintentionally made everyone else feel like pigs - regularly.

Email ThisBlogThis!Share to TwitterShare to FacebookShare to Pinterest
Labels: Chick-lit