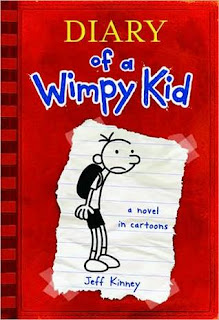 I know its a child's book. And I picked it for I needed a break from all romantic or fantasy themed books. I never could have chosen a better book to solve the purpose. In spite of my crazy weekend, I found myself laughing out loud at various moments.

The book is about a kid (of course, you would have guessed it by now ;-) ), who starts his middle school and writes his day-to-day life in his diary - oops, sorry, journal. The kid tries to become popular, by doing various things, which eventually he didn't enjoy or gets backfired.

The comic strips in between almost every paragraph is absolutely hilarious. This read was an unexpected surprise for me, because I never thought I would laugh like this forgetting where I am.

The New York Times, which rates children's serials collectively on a "Series Books" bestseller list, has included the Wimpy Kid series for 64 weeks as of April 10, 2010.

USA Today, which ranks best sellers based on sales alone regardless of genre or intended audience, has listed Diary of a Wimpy Kid in its top 150, peaking at number 8, for 141 weeks as of April 4, 2010.