Thanks to NetGalley and Entangled Publishing for providing the eARC of this book. 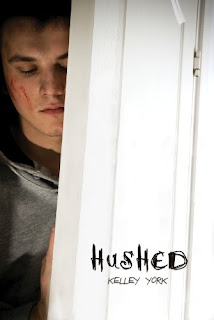 Eighteen-year-old Archer couldn’t protect his best friend, Vivian, from what happened when they were kids, so he’s never stopped trying to protect her from everything else. It doesn’t matter that Vivian only uses him when hopping from one toxic relationship to another—Archer is always there, waiting to be noticed.

Then along comes Evan, the only person who’s ever cared about Archer without a single string attached. The harder he falls for Evan, the more Archer sees Vivian for the manipulative hot-mess she really is.

But Viv has her hooks in deep, and when she finds out about the murders Archer’s committed and his relationship with Evan, she threatens to turn him in if she doesn’t get what she wants… And what she wants is Evan’s death, and for Archer to forfeit his last chance at redemption.

Hushed is definitely not a light fun-time story (you should have known - the cover itself seem creepy to me).  Its one of those book where
But when you feel all those things, you remember that its supposed to be a YA book.

Archer, a eighteen-years old boy, saw his best friend, Vivian, raped by the friends of Vivian's brother, when they were twelve-years old.  Being so much younger than the other boys then, Archer can't save her..can't protect her.  And from that moment on, Archer couldn't stop protecting Vivian.  He has been killing to protect her, working through his own guilt ever since.  Archer cuts himself down from the society, his friends and his mom and builds his world centered only around Vivian.

Vivian, the girl for whom Archer is killing his own soul, involves herself into toxic relationships and when broken down, come running to Archer, whom she ignores in other times.  Vivian's character is portrayed as extremely selfish, where she never cares about anyone else's feelings, not even Archer.  She blames others for everything and I was actually frozen, when she, at last, blamed Archer, for the reason her life is what it is..and I have to accept on one thing though - her life is surely a terrible mess.  Vivian is disturbed, more disturbed than Archer and when she lost her mom, she completely lost it.

When things are so bad for Archer and Viv, Evan comes to their school.  Evan crosses the iron gates that Archer formed around himself, becomes his friend and make him see that Vivian is been using him.  Archer's change is unbearable to look at, and I don't mean in the negative way.  But when things seem like Archer will get over it, another storm hits.  Vivian, realizing that there will not be Archer/Viv thing, shows her true dark nature and that's when all hell breaks loose.  I was scared and frozen to my place (of course, with the book in hand), that I just want to read that there will be something, some hope for Archer to hold on to his life.

Its the complexity of the characters and their past, that the main leads buried in them, that makes the book more dark and disturbing.  I loved the author's writing that characters are so realistic and the emotions so real.

This is definitely one of my favorite books this year.  Its so dark, intense, chilling, emotional and finally although hearbreaking, a flickering hope.  You did it, Kelley York..definitely did it!