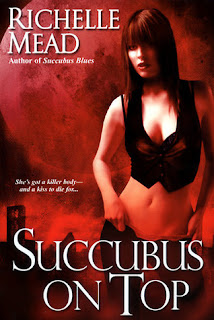 Georgina Kincaid series contains a total of 6 main books.  Succubus On Top / Succubus Nights is the second installment of this urban fantasy series, after Succubus Blues.  For books of Richelle Mead's usual standards and expectations, this book quite didn't meet them.

For those of whom, who are new to the series, our narrator and protogonist, Georgina Kincaid, is a succubus - a shape-shifting demonic creature from hell, who seduces men and gets the life force of humans.  Seth, a very famous mortal romance writer is Georgina's boyfriend.  Mead is a master in framing mysteries and let it unwind itself.  This time, the mystery is when an immortal crosses into the mortal world and ruins many of her friends' lives.  Georgina also has other things in her mind.  Her best old old friend and an incubus (the opposite of Succubus - a male immortal from hell, one who seduces and corrupts mortal women and lives on their life force), Bastien, is in big trouble and he needs Georgina's help to solve it.

Bastien, trying to get out of trouble, wants to make a "big hit".  He plans to corrupt a Christian talk show host, Dana, who is rallying against homosexuality and all the members of the society, who is not up to her high-minded expectations.  Bastien tries to bring her down and Georgina feels the need to help her friend.  Though I am angry with Dana, who herself is not up to her standards, but forces other people against their wills through her arrogance, public humiliation doesn't actually feel right, just for the sake of getting Bastien out of trouble.  Ah, people from hell!

Although Bastien's presence made the book more comfortable at first, when Georgina and Bastien's relationship turned more than friendship, I felt like slapping Bastien.  But what better can you expect from an incubus?

Although I liked the first book - Succubus Blues, I felt tired when reading this book.
Reason 1:  I am a huge fan of Mead's Vampire Academy series.  Her heroines are my favorite.  But though I liked Georgina, her disloyalty towards Seth disgusts me.  I really felt sorry for Seth.
Reason 2:  However hard Georgina and Seth tried, we all know their relationship is so doomed.  If Georgina thinks of more than touching Seth, his life force is going to be sucked out of him.  It felt like a deadlock.

I will definitely read the next book, but I am in no hurry.

Book Trailer - specially for you: 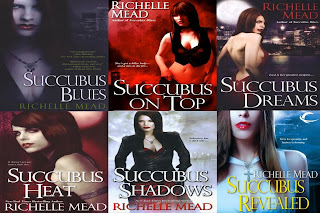 The series must be read in order, for proper understanding.

This book has so many covers, and I like to share them with you.  Just for your view:

What do you think?