So, here is another children's book, that needs notice. 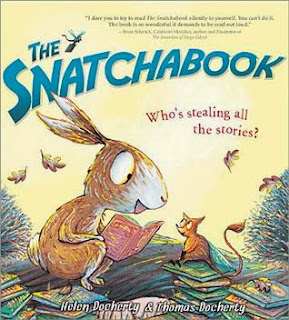 Where have all the bedtime stories gone?
One dark, dark night in Burrow Down, a rabbit named Eliza Brown found a book and settled down...when a Snatchabook flew into town.
It's bedtime in the woods of Burrow Down, and all the animals are ready for their bedtime story. But books are mysteriously disappearing. Eliza Brown decides to stay awake and catch the book thief. It turns out to be a little creature called the Snatchabook who has no one to read him a bedtime story. All turns out well when the books are returned and the animals take turns reading bedtime stories to the Snatchabook.

There isn't much to review in these type of books.  I finished it in about 3 minutes and most of that time is just to turn the pages.  Any story I reveal in this would be a spoiler.  Well, okay..someone is stealing all of the books and we need to identify them fast or else kids will have nothing to read at night.  Fun, easy and well, cute for kids.

Another picture book with cute pictures to keep kids interested about books.  It would be a great book for group reads for kids.

I wrote The Snatchabook at my old workplace, during the summer vacation of 2011. I was teaching Spanish part-time at a university, and at the end of the academic year we had learned that the entire Languages Department was going to be closed down, which meant that we were all going to be out of a job within a few months. Nothing like fear to act as an incentive..!  I had always wanted to be a writer and I felt that I had nothing to lose, so I spent two days a week that summer holed up in a small, bare office that nobody else was using, writing and writing. I think it was the intensity of that period, coupled with the pressure I had put myself under to produce something - I have always worked best under pressure - that enabled me to write The Snatchabook after a few weeks of trying to come up with a good story. Also, I had a lot of encouragement from Tom, which really helped.

Since then, we have moved house to Swansea and I am now self-employed as a writer, as well as being a full-time mum. Our youngest daughter, who is 3, goes to school for two and half hours a day, so I have to try to cram everything into that time. I like to work with as few distractions around me as possible - hence my almost bare desk. The zebra postcard was sent by a friend who knew that I was writing a story about a zebra (Abracazebra, out next year). I write partly by hand, and partly on the computer. I used to spend a lot of time writing as a child, so the discipline and the absorption feel very familiar. I still get annoyed if I am interrupted mid flow, unless it's by one of our daughters! 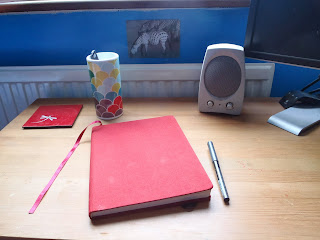 Tom's desk, on the other hand, is clearly an artist's desk. He works in ink and watercolor - hence all the bottles, pens and brushes.  The watercolor sketches on the desk are color tests for Abracazebra, which he is working on at the moment. 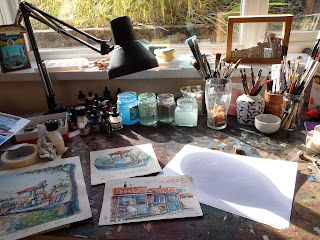