Cover Reveal: Suffering of a Witch by Suza Kates 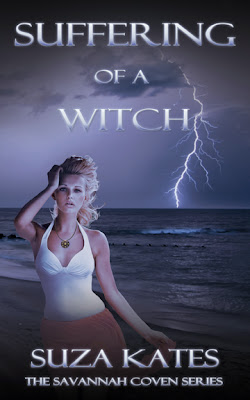 SHE WON’T GIVE UP
Kylie Worthington is in love with a man who doesn’t return the sentiment. She’s thrown away her pride and all attempts at pretense, yet Quinn St. Germaine still pushes her away. With the arrival of her trial, she will go where Fate dictates and is destined to fall in love. At least she’ll finally find the man she was meant for. Whether she likes it or not.

HE WON’T GIVE IN
Quinn has spent his life preparing for his family’s prophecy, but no spell or book could have ever prepared him for Kylie. Her passion for him is strong—and persistent—but he must deny what she makes him feel. Though he’s drawn to her beauty and vitality, deep inside he fears her. Quinn already knows what he wants, and accepting her means giving up on himself.

THEY BOTH WILL HURT
United in their battle against evil, Quinn and Kylie can’t see what’s right in front of them. And they never suspected what destiny had in store. Only the worst can bring them together, but will they be forever bound by love? Or by loss?

What do you think about the cover?