I think I have to include more of mature YA fantasy books in my reading pile.  That would have helped me appreciate this book more. 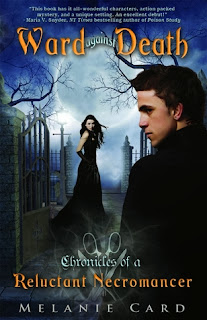 Twenty-year-old Ward de’Ath expected this to be a simple job—bring a nobleman’s daughter back from the dead for fifteen minutes, let her family say good-bye, and launch his fledgling career as a necromancer. Goddess knows he can’t be a surgeon—the Quayestri already branded him a criminal for trying—so bringing people back from the dead it is.

But when Ward wakes the beautiful Celia Carlyle, he gets more than he bargained for. Insistent that she’s been murdered, Celia begs Ward to keep her alive and help her find justice. By the time she drags him out her bedroom window and into the sewers, Ward can’t bring himself to break his damned physician’s Oath and desert her.

However, nothing is as it seems—including Celia. One second, she’s treating Ward like sewage, the next she’s kissing him. And for a nobleman’s daughter, she sure has a lot of enemies. If he could just convince his heart to give up on the infuriating beauty, he might get out of this alive…

Edward de'Ath, twenty-year old necromancer and physician, is called to wake a dead nobleman's daughter, Celia.  When she wakes up however, Ward didn't expect for her to ask his help to find her murderer and he absolutely didn't think he would accept her plea and follow run after her.  Ward has his own share of problems with the law before adding kidnapping a rich girl to it.  But, soon Ward understands, inside this attractive, brave and beautiful girl, Celia is pure trouble.  She is part of the Assassin Guild and her skill with weaponry and her cunning persona scares Ward.  In spite of all these differences, the couple manages to go through many difficulties to find the murderer and find themselves in love.

Ward is considered puny at first, but he is intelligent, kind and gentle.  The character development of Ward is amazing.  From a scared running-from-law shy person, he turned out to be a bold powerful one.  Kicked out from Physician's Academy, Ward learns to do surgery by stealing dead bodies.  He practices necromancy without liking it, but even without his knowledge, he is pretty good at it.  He always thinks of him as inferior, but when situation arises, he is still doing his job with everything he got.

Celia is a cunning, strong, kick-ass heroine, who makes use of any situation to her advantage, without thinking about others.  She is the member of the Assassin's Guild and we also know at the end, that she is a means to something big.  Spending time with Ward made her care for another person and also fall for him.

Apart from the characters, the world building is good as well.  It will take time for the readers to understand the world, but being the first in the series, this is expected.  Melanie is a great story teller and it shows.  Enjoyed every moment of it.

The cover art is okay, but it doesn't much say about the book, except that Celia comes back from the dead and something to do with physician's tools.

No cliffhangers.  But, some things are left open to go on with the next books.

Filled with action and adventure, this book is a great start to the series and have a great hope for the upcoming books.