We are going to celebrate day 15 of the Magical Christmas with Susanna Fraser.  Don't miss the previous giveaways!

And Entangled Publishing is giving away $50 Gift Card (Amazon or B&N) for the winner of today's giveaway.  The giveaway will run till December 31st, 2013 and the winners will be announced on January 1st, 2014!  But, before that, don't forget to read Susanna's great post about what a regency Christmas wasn't! 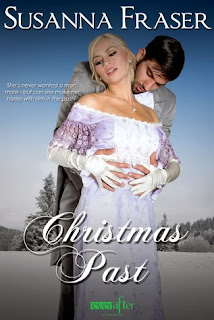 Time-traveling PhD student Sydney Dahlquist’s first mission sounded simple enough—spend two weeks in December 1810 collecting blood samples from the sick and wounded of Wellington’s army, then go home to modern-day Seattle and Christmas with her family. But when her time machine breaks, stranding her in the past, she must decide whether to sacrifice herself to protect the timeline or to build a new life—and embrace a new love—two centuries before her time.Rifle captain Miles Griffin has been fascinated by the tall, beautiful "Mrs. Sydney" from the day he met her caring for wounded soldiers. When he stumbles upon her time travel secret on Christmas Eve, he vows to do whatever it takes to seduce her into making her home in his present—by his side.


WHAT A REGENCY CHRISTMAS WASN'T


In my new novella, Christmas Past, my heroine, Sydney Dahlquist, travels back in time from 2013 to 1810. She becomes stranded there—and, this being a romance, finds love—so she’ll be living out her life in the 19th century.

The Christmases of two centuries ago prove a bit of a culture shock for Sydney, because the elements of her family’s typical 21st century American celebration for the most part don’t exist yet. Obviously, she’ll never again watch It’s a Wonderful Life, the Charlie Brown Christmas Special, or A Christmas Story, though I have a feeling she’ll work them into bedtime stories for her children, once she’s un-modernized them enough.

Christmas music won’t be the same for her, either. Most of the songs we associate with the holiday are from the 20th century. Though after the year I worked in a shopping mall where the season’s novelty gift was a mini Christmas tree that played “Rockin’ Around the Christmas Tree” and “Jingle Bell Rock” on endless loop (ENDLESS!), I’m not sure she’s missing much. (I’m more of a “Fairytale of New York” fan.)

Christmas trees were just getting the tiniest toehold in the British Isles at the time my story is set. The German royal family had one, so some of the high aristocracy would’ve at least seen a decorated tree. And the Hanoverian soldiers of the King’s German Legion who fought alongside the British army in the Napoleonic Wars put up Christmas trees when they could—which allowed me to work a Christmas tree into Christmas Past. And when Sydney and her new husband settle down to life in England after the wars end, they’ll be their neighborhood’s earliest adopters of the custom.

Odds are they won’t teach their children to believe in Santa Claus/Father Christmas, though. Up until the middle of the nineteenth century, references to “Father Christmas” in England have little to do with children or gift-giving. It’s more a symbolic reference to the general spirit of the season, especially the drinking and partying part. That said, “A Visit From St. Nicholas” (aka “’Twas the Night Before Christmas”) dates to1823, so maybe Sydney will be an early adopter there, too.

What about you? What are your favorite holiday traditions?

Entangled Publishing will be awarding $50 Gift Card (Anazon or Barnes&Noble) to the winner of the below Rafflecopter widget.