Day 6 of the Magical Christmas with Anne Perry + Harcover Giveaway

We are going to celebrate day 6 of the Magical Christmas with Anne Perry.  Don't miss the previous giveaways!

And Random House Publishing is giving away a hardcover copy of the historical fiction novel, A CHRISTMAS HOPE, for the winner of today's giveaway.  The giveaway will run till December 31st, 2013 and the winners will be announced on January 1st, 2014!  But, before that, you should seriously read her guest post, where Anne speaks about the books at Christmas! 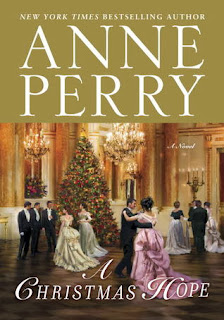 Anne Perry’s “vastly entertaining” (The Star-Ledger) holiday novels are “as delicious as mince pie and plum pudding” (Milwaukee Journal Sentinel). A Christmas Hope is just as delectable—the gripping story of an unforgettable battle between goodness and evil in Victorian London—and a lonely woman’s search for meaning in her life.
Although she lacks for nothing, Claudine Burroughs dreads the holiday season for forcing her to face how empty her life has become. She no longer expects closeness with her coldly ambitious husband, and she has nothing in common with their circle of wealthy, status-minded friends. The only time she is remotely happy is when she volunteers at a woman’s clinic—a job her husband strongly disapproves of. Then, at a glittering yuletide gala, she meets the charming poet Dai Tregarron and finds her spirits lifted. But scarcely an hour later, the charismatic Dai is enmeshed in a nightmare—accused of killing a young streetwalker who had been smuggled into the party.
Even though she suspects that an upper-class clique is quickly closing ranks to protect the real killer, Claudine vows to do her utmost for Dai. But it seems that hypocritical London society would rather send an innocent poet to the gallows than expose the shocking truth about one of their own.
Nevertheless, it’s the season of miracles and Claudine finally sees a glimmer of hope—not only for Dai but for a young woman she befriends who is teetering on the brink of a lifetime of unhappiness. Anne Perry’s heartwarming new holiday novel is a celebration of courage, faith, and love for all seasons.

PRAISE FOR THE CHRISTMAS NOVELS OF ANNE PERRY

“Perry’s Victorian-era holiday mysteries . . . are for many an annual treat.”—The Wall Street Journal

“Could have been devised by Agatha Christie . . . [Perry is] a modern master.”—Pittsburgh Post-Gazette

“[Perry] writes with detail that invades the senses.”—Lincoln Journal Star

“Poignant . . . should be on the Christmas stocking list of anyone who likes a sniffle of nostalgia.”—The Washington Times


For many of us our first memory of books is of our parents reading stories aloud, probably a bedtime treat.  I can remember snuggling up while my mother read Alice’s Adventures in Wonderland to me.  I never got tired of it.  I could read it with her, and know immediately if she had left out a word.  It was imagination and humour.  It was also familiar.  My mind could travel the world and beyond, while I was comfortable and totally safe.  At least I felt so.  Actually it was London during the blitz, but even in an air raid shelter, books hold their magic.

A little older and I could read books myself – slowly, perhaps, missing a word or two, but the imagination filled the gaps for me.  Island of Adventure, The Famous Five.  Reading with a torch under the bed covers.

As an early teenager I was given a very old Boys’ Own Annual.  It was a great doorstep of a book and filled with the best adventures anyone could think of, filled with courage and honour.  The one I remember most clearly was about a boy who accidentally stumbled into ancient Egypt and had the most hair-raising adventure with the great animal-headed gods.  I can still see in my mind the picture of the white horse he rode in the desert.  That was the stuff of reading by the fire on a winter afternoon, tea and crumpets oozing butter, and perhaps a little golden syrup.

Of course in time I graduated to Ryder Haggard and Ayesha, Doyle and Sherlock Holmes.  Christmas was just one long holiday and there were always quiet hours to curl up with a book in the sure knowledge that someone would call me in time for dinner.

Why do so many of us like to curl up by the fire, with roast chestnuts and frighten ourselves out of our wits?  It is even better if the weather is appalling, howling wind, snow piling up, even lights flickering now and then.  Anyone fancy a spot of Edgar Allan Poe?  Or a really sinister murder?  How about a cracking good thriller?  Indulge yourself completely!  Have a box of chocolates as well!

If you want to be a little less self-indulgent you could always find really good books to give away.  Some of the best books I have been given have been old treasures someone found in a second, or twentieth-hand bookshop, read many times over, a dedication in beautiful handwriting in the front, perhaps a hundred years old.

One cannot turn the pages without wondering about the person who gave it as a gift of the mind, or the one who recovered them and read them.  Was the book given in love?  Was it long searched for and chosen with care and meaning?  Was it familiar, or a happy discovery.

Whatever the circumstances a world was handed to someone, in a sheaf of pages, someone’s work, someone’s dreams were passed on as a gift.  Someone sat in the sun, or by the fire, or curled up in bed and was transported into the realm of Christmas.

Thanks to Ballantine Books (Random House Publishing), today, I have a hardcover of "A CHRISTMAS HOPE" to give away.  Just enter the giveaway through the Rafflecopter below and please share it to your friends.  Giveaway open to U.S/Canada residents only (as per publisher's request).