We are going to celebrate day 21 of the Magical Christmas with Elisabeth Wolf.  Don't miss the previous giveaways!

And Sourcebooks Jabberwocky is giving away a print copy of LULU IN LA LA LAND for the winners of today's giveaway.  The giveaway will run till December 31st, 2013 and the winners will be announced on January 1st, 2014!  But, before that, don't forget to read Elisabeth's post about the Christmas movie and the family feud! 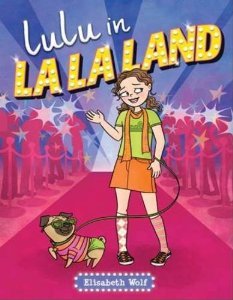 Lights! Camera! ACTION! Lulu, a soon-to-be 11-year-old living in Los Angeles, prefers gardening to primping and homemade guacamole to five-star restaurants. You'd never know that Lulu is the daughter of Hollywood's A-List power couple. This year Lulu is determined to throw the kind of birthday party her glamorous parents might actually attend (which means Watson the pug is not invited). But it's so not Lulu. Should she morph into the Tween Queen of Tinseltown or stay true to her book-loving, mis-matched socks self?
Fall in love with Lulu as she tells her story in an innovative script-novel hybrid. After all, everyone is LA is writing a screenplay!


The Christmas Movie and the Family Feud

In my book, Lulu in LA LA Land, my main character, Lulu lives in a movie world.  Her mother is a famous director and her father is a hyper-cool actor.  Lulu, however, is just a regular kid who loves what regular kids love:  her dog, her best buddy, baking sweet treats, eating cheesy meaty yummy foods, and, most of all, using her imagination and boundless energy.  Although Lulu lives in the heart of the Hollywood movie universe, what she wants MOST of all in the WHOLE world is for her family to spend time as, well, a family!  In thinking about Christmas and Lulu, I thought of one of America’s most honored family Christmas traditions:  The Christmas Movie.

Sitting and watching a Christmas-themed movie is one of those great holiday events that, in theory, can be done by the entire family.  Multi-generations of family members snuggle up together.  It’s cold outside.  Stomachs feel stuffed.  Presents have been opened, tried on, tried out, and tossed aside.  Everyone’s already talked lots and listened lots and laughed at and with each other lots.  So, MOVIE TIME.  Before opening credits can float across the screen, however, a movie has to be selected.  And, deciding on the movie to watch could actually be the hardest decision of a family Christmas!  Here’s how it plays out in my family.

The Christmas movie comes in so many genres that selecting one requires well honed diplomacy based on shifting alliances and unstable balances of power. For example, there are the Classics:  Miracle of 34th Street, It’s a Wonderful Life, White Christmas, and Scrooge.  Of course, younger family members think watching a black and white movie would be like making a call on a dial telephone.  Then there are family members who just can’t stomach watching one of these classics for the 25th time. OK, so arguments made, the family moves onto the next type.  Kid-oriented classics with moral messages: Charlie Brown’s Christmas, The Muppets Christmas Carol, Polar Express, and How the Grinch Stole Christmas.  These movies are killed off easily by a coalition of grandparent types and tween / teenagers.  These movies are just too juvenile for the old and young sets.  New parents who suggest these movies are actually secretly happy others nix them … because they themselves are sick of these animated kiddie flicks. At this point male family members pitch action movies:  Die Hard, Batman Returns, or, recently, the crazy / creepy Tim Burton’s Night Before Christmas.  Having just caved on sweet, children’s films, parents’ of little kids assert themselves to kill off action movies. Only pounding, pushing or punching a sibling or cousin is tolerated.  On-screen movie violence is a non-starter.

Now, at this infuriating moment in the Christmas movie family feud, the movies most likely to get majority approval ride to the rescue.  Christmas comedies:  Elf, Santa Clause, Home Alone, Trading Places, and National Lampoon’s Christmas Vacation. Year after year, one of these wickedly funny but sweet underlying messaged movies calms the family Christmas commotion for almost two full hours.  All happy endings, right?! Well, there was that one year in MAINE…

Four years ago, my family spent Christmas with my best college roommate and her family.  That meant five kids (ranging in age from six to eleven), two forty something moms and matching forty something dads under one roof for several very cold winter days. Christmas movies were the time of day when not a creature was stirring all through the house (well except for the two dogs).  One night, with so many movies already watched, the decision was made to branch out and watch a newer movie, Christmas with the Kranks.  Seemed perfect.  A crabby dad cancels celebrating Christmas because his daughter’s not coming home for the holiday.  At the last minute she decides to come home and there’s nothing planned. We all needed the laughs.  Problem was ONLY my friend, Seana, and I laughed.  Actually, we roared.  We laughed so hard we thought we’d puke.  We laughed so hard we snorted.  We laughed so hard tears streamed down our cheeks.  And, everyone else, from the six-year-old twins to the forty something dads, looked at us as though we had gone insane.  Watching Christmas with the Kranks remains the single most memorable Christmas movie experience for everyone, especially for the kids who still chat among themselves about the time their mother’s totally lost it watching one of the least funny Christmas movies ever made.  Sometimes, the Christmas movie can bring out some deep emotion you just never knew you had lurking inside you.

At the end of Lulu in LA LA Land, Lulu’s parents head off to the Academy Awards.  Lulu stays home to watch the Awards on TV and make caramel popcorn balls with her sister and best friend.  I came up with that idea because there is NO finer treat to munch during the family Christmas movie than caramel popcorn balls.  Preparing them is fun, easy, and best done with lots of greasy hands shaping and rolling the sticky popcorn into balls.   Merry Movie Christmas!

**Dump all the warm, just popped popcorn in a super big bowl.  Try to not dump in the un-popped kernels.

**In a saucepan stir together marshmallows, sugar, corn syrup, butter, water and salt.  On medium heat, stir everything until its smooth.

**Slowly pour the hot caramel syrup over the popcorn.  This is best done with two people – one person should stir the popcorn while the other pours from the hot pot.

**Quickly greasy up your hands with butter, a tiny drop of vegetable oil or cooking spray.  While the popcorn and syrup combination is still warm form the popcorn into small balls.

**Place each ball on parchment paper or greased wax paper and let them cool.

**Important note: don’t let the balls touch each other because they will stick together when they cool.

NOTE:  for super quickie caramel popcorn balls: just unwrap every caramel in a package of caramels and dump them in a pot with light corn syrup and 2 Tablespoons of water.

Sourcebooks Jabberwocky will be giving away a print copy of LULU IN LA LA LAND for the winner of the below Rafflecopter widget.

The giveaway is open for U.S/Canada residents only.