We are going to celebrate day 17 of the Magical Christmas with Eric Pierpoint.  Don't miss the previous giveaways!

And Sourcebooks is giving away a print copy of "The Last Ride of Caleb O'Toole" for the winner of today's giveaway.  The giveaway will run till December 31st, 2013 and the winners will be announced on January 1st, 2014!  But, before that, don't forget to read Eric's great post about Christmas Film! 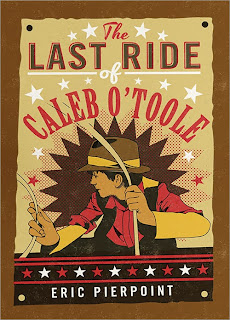 "I need you to be strong."
Caleb O'Toole could hear his mother's last words as clearly as if she was sitting right next to him. He promised her he'd keep his sisters safe. But safety is over a thousand miles away in the rugged Bitteroot Mountains--past dust-choked deserts and thorny tumbleweeds and as sun so hot, it's hard to breathe. Tornadoes and hungry wolves wait for them on the path ahead. But with the infamous Blackstone Gang hot on their trail, Caleb has no choice but to keep going. There's no telling how far the gang will go to keep their latest murder a secret. And Caleb is the number one witness to their crime.
Caleb O'Toole can hear his mother's last words: "I need you to be strong." and he can't let her down. 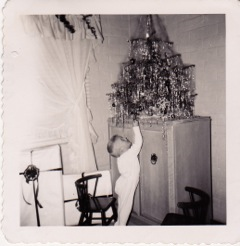 Christmas in the '50s

I’m going to weigh in on my favorite Christmas movie. I’m a sucker for IT’S A WONDERFUL LIFE. One of the things we can all count on is this classic American story every year. How can you not like the performances of some of our most cherished actors in Jimmy Stewart, Donna Reed, and villainous Lionel Barrymore? I get a kick out of old photographs of my family. 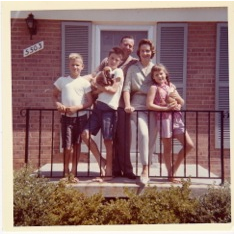 Family photo from the '60s

My mother looked very much like Donna Reed. Christmas was such a warm gathering time for us. There was always a turkey in the oven, stockings nailed over the fireplace. To me, tuning into Capra’s film each Christmas season feels like taking out your old baseball glove and thinking back on my youth and all the years of family gatherings. I miss those who have passed on and think about how they affected my life, or how I may have affected theirs. I think about how the little things really do matter and how an average man can influence the world. Stewart’s George Bailey sacrifices everything, his dreams, and the desire to travel. His world collapses around him. He feels like a failure, that his life was all for nothing.  He figures his only real value is a life insurance policy. At the brink of suicide he is shown instead the true value of his life and his character. If not for him, Bedford Falls would be a den of bad stuff! He is given another chance. He is shown by his guardian angel how he has touched so many lives in positive ways. Lessons for us all to live life consciously with compassion, empathy, love, and honor. He is resurrected and joyfully realizes he truly is the richest man in town.  “LIFE” has so much heart. As wonderful as James Stewart is as George Bailey, it can only work with the truly evil portrayal of Barrymore’s Mr. Potter and all the other supporting players. The film rocks to this day!

Sourcebooks will be giving away a print copy of the "THE LAST RIDE OF CALEB O'TOOLE" to the winner of the below Rafflecopter widget.

This is for residents of US/Canada only.