Review: The Boy Who Flew With Eagles 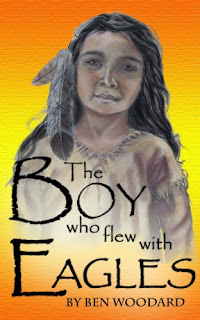 
An adventure story of a boy challenged to save a family of eagles or become their meal. With famine looming for animals and humans, the boy works to feed the eagles and learns their wisdom. As a reward for his help, he asks the eagles to teach him to fly. The book depicts his struggle, both mentally and physically, to fly and convince his people that fewer salmon each year are due to their actions. The story combines myth, environmental awareness and the concept of working together. It is a short middle grade novel.

"The boy who flew with eagles" is about a boy named Naa'ki, who was carried away by a giant Mother Eagle as food.  After making a deal with the Eagle, that he would feed the eaglets and the Mother Eagle by catching fish, Mother Eagle lets Naa'ki live.  While in his time with the eagles, Naa'ki learns so much about the problems of other animals.  Also, he asks the Mother Eagle to teach him how to fly.  After some attempts, Naa'ki learns their techniques about flying.  With the new found knowledge about flying and about the importance of the lives of the forest, Naa'ki sets out to his village to share with his populace.  I don't want to put in more spoilers to the readers..so, please read the ending for yourself.

The author has a beautiful message to the readers.  For all to live, we must share.  We, humans, have exploited so many resources, that Mother Nature has provided  us without any questions.  Its time for us to think, for once, wisely and know about the conservation of resources.  Personally, this message should be out in the world for everyone to read and learn.

The illustrations, that are in each chapter, are so apt and speak volumes.  The book is recommended to everyone - kids or adults.  A great read and an awesome leason!

Email ThisBlogThis!Share to TwitterShare to FacebookShare to Pinterest
Labels: Children