Review: The Prophet - The New Brotherhood 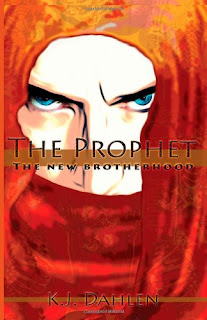 
After a three year search for a serial killer known as The Prophet, FBI agents Sean Sebastian and Rheta Morgan; both who have a personal reason to stop him, finally get a break and The Prophet is within their reach. Confrontation leads them to discover a secret network called the New Brotherhood and the more they find out about the New Brotherhood, the more determined they are to stop it. When The Prophet takes Rheta and Sean's sister hostage, the race is on to free them and bring down the Brotherhood.

The author presents us with a psychopath, who kills women, just because he can.  He calls himself as "The Prophet",  moves around countries, charms the population with his talented speech, robs them of all money, kills an innocent woman and leaves for next place to continue the process.

The FBI agents, Rheta and Michael is on his trail, trying to stop him.  Rheta's sister and Michael's fiancee are also in the list of victims, killed by the Prophet.  While on his trail, they both are faced with Prophet's smart escapades and misses him several times.  Soon, there are various twists, surprises and shocks, and then the FBI agents find themselves with him face to face.

The thrill of the novel has been kept from beginning to end.  The novel was realistic and enjoyable.  The need to catch the Prophet is felt more by the readers, as much as the FBI agents.