We are going to celebrate day 13 of the Magical Christmas with Callie Hutton.  Don't miss the previous giveaways!

And Entangled Publishing is giving away $25 Gift Card (Amazon or B&N) for the winner of today's giveaway.  The giveaway will run till December 31st, 2013 and the winners will be announced on January 1st, 2014!  But, before that, don't forget to read Callie's poetry! 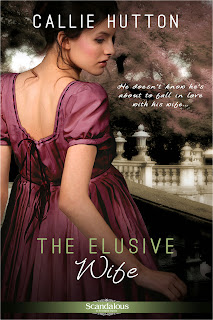 Jason Cavendish, the Earl of Coventry, is trying to discreetly locate his unwanted and abandoned bride among London society to request an annulment. However, he doesn’t remember what she looks like because he was blind drunk at his arranged wedding and hasn’t seen her since. The fascinating Lady Olivia has captured the Earl’s attention. Newly arrived from the country to stay with her school friend for the Season, she is appalled to discover that her husband, Lord Coventry, doesn't even recognize her. She's not about to tell the arrogant arse that she is his wife. Instead, she flirts with him by night and has her modiste send her mounting bills to him by day. Hell hath no fury like a woman scorned… Too bad this woman finds her husband nearly irresistible.


‘Twas the night before Christmas

‘Twas the night before Christmas,
And the author said ‘damn’
I need to get this book
Into my publisher’s hands

Her children were nestled all snug in their beds,
While she got two aspirins for the pain in her head,

Mama in her kerchief and papa in his cap,
She hoped this last revision would be but a snap

When out on the lawn there arose such a clatter,
She hopped from her laptop to see what the hell happened now!

The moon on the breast of the new fallen snow,
Gave a luster of midday to objects below,
When what to her wondering eyes should appear
But her hero dressed as Santa without any beard−or shirt

His eyes, how they twinkled! His dimples how cool!
His cheeks were like roses, his chest made her drool

He spoke not a word, but went straight to his work,
Fixing the scene where she’d made him a jerk,

And laying his finger under her chin,
He gave her a kiss as wicked as sin,

He sprang to his horse, to his horse gave a whistle,
And left her alone with nothing but sizzle.

But she heard him exclaim, ere he rode out of sight


Get your ass back to work, it will be a long night!

Callie will be awarding a $25 Gift Card (Amazon or Barnes & Noble) to a commenter who correctly identifies the two main characters in "The Elusive Wife". They can find the information here: http://bit.ly/18UEG73