We are going to celebrate day 4 of the Magical Christmas with CJ Lyons.  Don't miss the previous giveaways!

And today, Sourcebooks is giving away a paperback for the winner of today's giveaway.  The giveaway will run till December 31st, 2013 and the winners will be announced on January 1st, 2014!  But, before that, you should seriously read her guest post, where CJ speaks about Frank Capra! 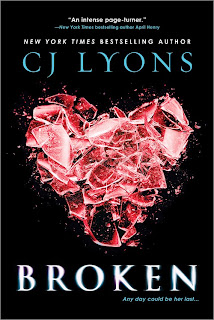 New York Times bestselling author CJ Lyons makes her YA debut with a fast-paced thriller sure to keep readers guessing to the very last page
The only thing fifteen-year-old Scarlet Killian has ever wanted is a chance at a normal life. Diagnosed with a rare and untreatable heart condition, she has never taken the school bus. Or giggled with friends during lunch. Or spied on a crush out of the corner of her eye. So when her parents offer her three days to prove she can survive high school, Scarlet knows her time is now... or never. Scarlet can feel her heart beating out of control with every slammed locker and every sideways glance in the hallway. But this high school is far from normal. And finding out the truth might just kill Scarlet before her heart does.

One of my all time favorite movies is Frank Capra’s It’s a Wonderful Life, which was actually one of his last movies.  The culmination, if you will, of decades of telling David v. Goliath stories with the recurrent theme that Capra finally verbalizes in Wonderful Life: No man is poor if he has friends.

Wonderful Life isn't really the magically uplifting movie we all think it is--or should I say, we all FEEL it is.  And therein lies the magic of Capra.

He was one of the first filmmakers to use "real life" subject matter for his movies.  His first major film, American Madness, was filmed during the Great Depression and told the story of a bank that has a run on it and is failing.  It is saved because of the past actions of the good-hearted bank manager who had faith in "little people" when his friends call upon them to help him out in his time of need.

Shades of Wonderful Life--but many of Capra's films have shades of Wonderful Life in them.  Even the music and words of Auld Lang Syne are repeated in several of his movies.  His heroes are almost uniformly Davids caught unprepared for their Goliaths, innocents thrust into the dirty street fight that is the "real" world.

And Capra's heroines?  They also follow a repeated theme of redemption.  They begin as conniving, world-weary professional women (remember this is the world of the 1930's and 40's!) who are redeemed by falling in love with the hero and embracing his idealistic ways.

These themes were repeated so often that the term Capraesque now means anything that evokes a feeling of an optimistic, "feel-good" movie genre, or what some critics call the genre of the "hopeless dreamer."

But one other recurrent theme in Capra's films--and what truly sets them apart from so many other filmmakers of his era--is that often his Goliaths are never defeated.

Yes, the hero wins--but he wins a battle, not the war.

Potter in Wonderful Life is neither defeated nor redeemed.  Nor is the Hearst-figure in Meet John Doe, or King Wesley in It Happened One Night.

Some nemesis figures are redeemed--Senator Payne in Mr. Smith, the banker in You Can't Take it with You--but Capra always makes it clear that there are always other Goliaths are waiting to fill their places, so the war is not won.

In fact, for Capra, the war is never won.  Because it's never won in the real world that he takes his stories from.

He tempers his films with romance and humor to soften this blow, always ends them on an inspirational upbeat note for audiences to carry home, but in fact, he is the master propagandist, preparing his army and sending them off to war. Ordinary people finding the courage to become their own heroes and change their world.

For a storyteller, this is an awesome power to behold.  One that I covet and try to reproduce in all of my own novels.

Thanks for reading!
CJ

Winner of the International Thriller Writers’ coveted Thriller Award, CJ has been called a "master within the genre" (Pittsburgh Magazine) and her work has been praised as "breathtakingly fast-paced" and "riveting" (Publishers Weekly) with "characters with beating hearts and three dimensions" (Newsday).

Learn more about CJ's Thrillers with Heart at www.CJLyons.net

Thanks to Sourcebooks, today, I have a paperback copy of CJ's book "BROKEN" to giveaway.  Just enter the giveaway through the Rafflecopter below and please share it to your friends.  Giveaway open to US/Canada residents only.