Today, we have Perry Martin, the author of Pretty Flamingo, a beautiful love story, in our blog for the interview.  Before the interview, here is a brief excerpt from the book. 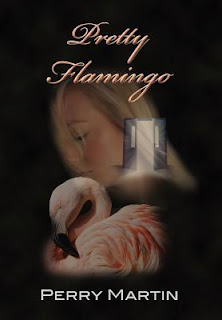 He was crying—sobbing, actually. His chest was heaving, and hot tears were streaming down his cheeks. He was still half-asleep and not quite sure if it was the crying that had woken him up or if, in waking, he’d been torn from somewhere that he didn’t want to leave, and the leaving had brought on the tears.
Pulling himself out of the clutches of sleep, he wiped his eyes with his hands, turned his head, and squinted at the luminous dial of his bedside clock. 5:00 a.m. He’d been asleep for just four hours. With one hand, he groped around on the bedside table until he found the Kleenex box he knew was there somewhere, tugged out a couple of sheets, and blew his nose. Then, closing his eyes again, he lay there in the predawn dark and tried to recall what he might have been dreaming about. All he saw was blackness. And yet . . .
He frowned. There was something there, he was sure of it, but the memory of it seemed to be just out of reach.
Concentrating his efforts, he tried to recapture anything that might give him a clue as to what had caused the crying, but all he felt was a longing that surprised him with its depth of emotion, and he felt tears welling up inside him once more.
“Okay, David,” he muttered to himself. “Get a grip!”
He reached over, turned on the bedside lamp, and sat up
in bed. As he looked around the room, his eyes fell on the walk-in closet. He’d left the louvered doors open late last night when he’d gone to bed, exhausted from two marathon sessions in a row at his recording studio. Only his clothes remained. There were empty shelves and hangers where Sandy’s things used to be.
Sandy—the latest addition to his unbroken record of failed relationships! Was that what he’d been crying about? He’d felt bad about it, admittedly. Mostly for her, though. She’d been justifiably upset when it finally became apparent that their relationship wasn’t headed down the aisle anytime soon, if ever. There’d been tears and some mention of his “inability to really commit himself to a relationship,” and then there’d been the leaving.

I wanted to write from about 9years old on.  My dad gave me a Zane Grey western to read at that age and it was the first book without pictures that I'd ever read.  At first I started reading it to feel grown up and be like my dad, who was an avid reader.  Then the story caught hold and I became an avid reader myself.  After that I remember deciding that I wanted to write stories and did actually write a few short ones. I also started work on a novel when I was 12.   Then, I saw all those girls screaming for the Beatles and I changed my mind and became a musician for most of my life so that I could have girls scream for me.  Now they look at me and scream for a different reason - - so I decided it was time to go back to my original childhood dream of being a writer.

I get up around 7 am.  Do stretches and an ab work out.  Then I handle all my e-mail accounts, Twitter, Facebook stuff.   Work my day job all day (I'm a self-employed house painter) then come home and do a little work out in the gym.  Shower. Eat dinner.  Practice on my Fender Telecaster for about an hour - - or until my fingers bleed.  Do the e-mails,  Twitter, Facebook thing again and then work on my next novel until my head hits the keyboard.  At which time I brush my teeth - - and floss - - hop into bed and read whatever novel by one of my self-published peers I happen to be reading until the Kindle falls out of my hand and I fall asleep.  Weekends are a little more exciting - - but only a little.  There'll be time for excitement when I hit the bestseller list. Right now I live vicariously through the characters I write about.

My first novel, "Pretty Flamingo", a dramatic love story, is completed and on sale most everywhere online in e-book format, softcover and hardcover.  I am halfway through the first draft of my second novel, "Savannah" and I have a complete outline written for a third novel.  There's a preview of "Pretty Flamingo" and "Savannah" at www.perrymartin.com

Is there a song you could list as the theme song for your book or any of your characters?
"Reason Why" by Sleepthief.  The most hauntingly beautiful song you've probably never heard of.  Check it out, it's gorgeous.  The first verse and chorus would fit perfectly at one of the most devastating parts of the story.  I'm hoping to use it in the movie version of "Pretty Flamingo".

Having an Aussie film director (whose name I can't mention at present) tell me he thought my book was "Fantastic" and that my writing style reminded him of Nicholas Sparks and that he'd love to direct the movie when we have a screenplay.

Write from the heart. Don't hold anything back. Open your soul and let it bleed into the pages.

John D. MacDonald's, "The Girl, the Gold Watch and Everything".   The protagnist comes into possession of a watch that causes time to stop for everyone but him, giving him the power to influence events.

How do you react to a bad review?

I try to ignore it.  You know what they say about opinions? :-)  Plus, I know it's going to be impossible for everybody to like my books.  As long as  enough people like them to make it worth my while to continue writing that's all I care about.

Which authors have influence on you most.. how?

Probably Stephen King and Nicholas Sparks.  They are not in any way alike, I know, but there are separate elements of their writing that have influenced me.  Stephen King always made his characters seem so real; he gave them inner dialogue that made you privy to their thoughts. I really like that. Plus he writes such interesting and unique stories.  Nicholas Sparks manages to reach people emotionally with his often heartbreaking romance/dramas; he's made me cry more than once.  I wanted to try and combine those elements into what I wrote.  So far, from the reader reviews and comments I've seen, it looks like I've succeeded with "Pretty Flamingo".

The power to heal people and take away their pain - - emotional as well as physical.  Is that technically a superpower?  Well, it would be a cool power to have, anyway.

Favorite genre?
Any, as long as it's well-written.

Favorite dish?
Anything exotic.  I do love Panang Curry.

Your best trait?
Persistence.  I will not give up!