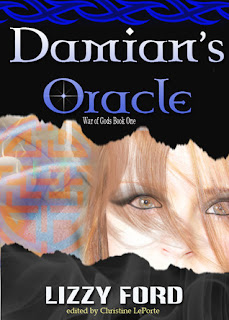 *** This book was provided by WLC for review purposes ***


Damian's Oracle was one of the books I enjoyed, but can't rate more.  The story was vague in some places..I felt distracted from the book at those times.

A story about the war between the White God, Damian and the Black God, Czerno, where one human girl, Sofia, gets dragged into.  Sofia has powers to read anyone's soul with a single touch - well, in short, Oracle.  The Gods fight about who gets the girl, for the one who gets the Oracle becomes more powerful.  Czerno kills Sofia, in order to bring her back as his slave.  Damian, who in the mean time has grown to be affectionate towards the Oracle and saves Sofia by bringing her back from the dead, which means that Sofia is in debt to Damian for eternity.  Now, Sofia has to live her new life as Oracle and adjust to its good and evil things, in addition to drinking Damian's blood instead of normal food to be alive.

The story was told in a way that kids will like, but not for mature readers.  It feels like Gods are depending upon the human technology at some places and supernatural powers in other places.  Trust me, when I say I am a huge believer of these fantasy things.  But the vague references of vamps and Watchers, then back to computers and video games, is totally confusing.  And I really wonder whether Gods use such language.

As I said, I enjoyed the overall plot of the novel, but the story telling was not up to the mark, which leads to the reason I can't rate more than this.