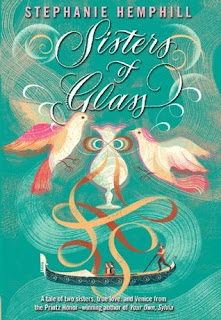 *** Thanks to NetGalley and Random House Children's Books for the ARC ***

Maria is the younger daughter of an esteemed family on the island of Murano, the traditional home for Venetian glassmakers. Though she longs to be a glassblower herself, glassblowing is not for daughters—that is her brother's work. Maria has only one duty to perform for her family: before her father died, he insisted that she be married into the nobility, even though her older sister, Giovanna, should rightfully have that role. Not only is Giovanna older, she's prettier, more graceful, and everyone loves her.

Maria would like nothing more than to allow her beautiful sister, who is far more able and willing to attract a noble husband, to take over this role for her. But they cannot circumvent their father's wishes. And when a new young glassblower arrives to help the family business and Maria finds herself drawn to him, the web of conflicting emotions grows even more tangled.

Giovanna and Maria are the two daughters of the prestigious glass-blowing family of Murano, the home of glass-makers.  When their father died, he mentioned his last wish for their second daughter, Maria, to be married to a noble man.  So, Giovanna was left with no dowry, while Maria was made to learn the ways to be a lady and to marry a noble man.  Maria, although not wishing for any of this, had accepted to be her fate..until she falls for someone else, who is not a noble.  Maria has to work her way through her mother's stubbornness, her sister's jealousy and the older and uglier men, who comes to get her hand.

This book is said to be written in verse.  Well, to be honest, I first thought it is a formatting issue that the lines are so disconnected.  It doesn't definitely feel like a verse to me..but again, I am not a better judge for poetry.

I also felt so disconnected throughout the book.  And that's one reason, this book felt so disappointing.  Sisters of Glass have a good story-line.  Maybe, without those verses, it might have captured more interest.  Even the romantic scenes just doesn't feel romantic.

I liked the plot, but the way it was told made me lose interest.  I would have liked it more, if its a regular prose writing.

STEPHANIE HEMPHILL is the author of the Printz Honor-winning Your Own, Sylvia, a verse portrait of Sylvia Plath, as well as Things Left Unsaid and the critically acclaimed Wicked Girls, which received four starred reviews.

Email ThisBlogThis!Share to TwitterShare to FacebookShare to Pinterest
Labels: Young-adult