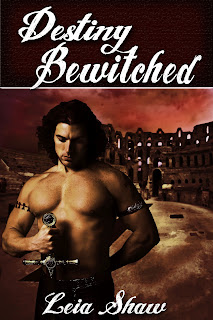 Deemed “trailer trash” by humans and the daughter of the most disgraceful family of witches and warlocks since the Puritan age, Samantha is used to fighting her own battles. When her younger sister is taken to the Underworld, Sam doesn't hesitate to rescue her. To survive the harsh land, she makes a deal with a demon — the most dangerous of creatures in the realm. Even with those lustrous horns, Geo is as hot as the hell she's stuck in. Fighting nasty beasts in a supernatural version of the gladiator games is easy compared to falling in love with a man who has no future to offer.

She struggled beneath him, her cheeks flushed and chest heaving. Several necklaces – silver chains with various charms and a piece of leather tied around a feather – drew his gaze to her pale, slender neck. A neck he could sink his teeth into. He liked the look of her underneath him far too much. Two hundred years without a woman…why couldn’t Ares just have had him flogged?

Reluctantly, he did. “You’d be more than squished had I been someone else. Your stance is too narrow. That’s why you fell over so easily.”

She scowled at him and straightened her clothing. “Don’t tell me how to fight.”

“Then stay behind me and I’ll do it for you.”

Gods, she was a saucy thing. Repressing a smile, he picked her sword up off the ground. “Spitfire and ambition will only get you so far, Samantha.” He held out her sword. “Knowledge and patience are the foundation for success.”

“My sister doesn’t have time for me to be patient.” She started to put the sword back into its sheath.

“No.” He grabbed her wrist and, under her icy glare, he positioned her sword arm out in front of her. “Widen your stance.”

She tossed him a dirty look but did as he said.

He walked a circle around her. “Good. Now scan.”

She looked left then right. “Clear.” She took a step forward but he grabbed the back of her shirt and tugged her against his chest.

“Never forget the sky,” he rasped against her ear.

Her breath quickened and he could hear her heart pound wildly. She looked up then whispered, “Clear.”

“Good. I can’t use a dead witch so try to keep yourself alive, yes?”

“I suppose I can try,” she answered drily.


1.      Is there an inspiration behind why you chose writing?
Well I was pretty much composing sonnets in the womb so I’d say I was born to do it. Not that my books are literary genius or anything. But writing gives me an outlet for my crazy imagination and twisted sense of humor.

4.      What are your current literary works?  Any sneak peaks?
I’m so glad you asked! My paranormal romance series, Shadows of Destiny, contains 4 books and 1 novella. Each book can be read as a stand-alone or out of order but they all connect and have repeating characters. My newest release, Destiny Bewitched, sets up the scene for the next two books in the series. Destiny Bewitched follows the mortal witch, Samantha, into the Underworld where she searches for her younger sister. She meets Geo, a sexy demon who happens to need a favor from a witch to get home. They make a deal to help each other then travel across the dangerous terrain. Hot sex, sarcastic humor, a supernatural version of Gladiator games…it’s a lot of fun! Up after that is an emotional story about a side character from book one, Destiny Divided.

5.      If you could invite any 5 people to dinner who would you choose?
Wow. What a tough question. Umm…Jesus, Ghandi, Martin Luther King Jr., Kresley Cole, and Johnny Depp.

6.      Which authors have influence on you most.. how?
Kresley Cole cause her world-building rocks and she’s so freakin’ funny. And Ilona Andrews who knows how to write a damn good heroine.

7.      Please tell us in one sentence only, why we should read your book.
I’ll make you smile, sigh, maybe cry, definitely laugh, and fall in love with some bad-ass but romantic heroes.

8.      Tell us your most rewarding experience since being published.
Hearing readers tell me they loved my books!

9.      What's one piece of advice you would give aspiring authors?
Join a critique group. Don’t think you can go it alone. We constantly learn and grow as writers and it’s important to surround yourself with others who will help you.

10.  If you could jump in to a book, and live in that world, which would it be?
Kresley Cole’s Immortals After Dark so I could have me a sexy lychae.

11.  If someone wrote a book about your life, what would the title be?
The Monster in My Mind. Or something. That’s a hard question!

12.  What is your favorite scene in the book and why do you love it?
In Destiny Bewitched it would have to be when they’re travelling through an underground tunnel and get eaten by a giant worm. Just cause I’m a little twisted that way.

13.  What TV show/movie/book do you watch/read that you'd be embarrassed to admit?
Why on earth would I admit it here? Lol. Okay, I’ll play nice. I don’t have time to watch TV much anymore but once in a while I’ll catch that Toddlers and Tiaras show. Just to yell at the crazy stage moms and scoff at their Madonna babies. Sometimes a good rant makes you feel better inside.

14.  What is one book everyone should read?
Other than mine? Hmm… Hitchhiker’s Guide to the Galaxy. Most people need to laugh more often.

15.  One food you would never eat?
Too many to name! I’m so picky. Most everything my husband eats when he goes to for work.

1. Favorite place? –
2. Best christmas present? – diamond heart necklace
3. Favorite book? – Matilda by Roald Dahl
4. Favorite author? – Kresley Cole
5. Favorite smell? - christmas
6. Favorite series? – Kate Daniels
7. Nickname? - none
8. Favorite writing spot? – anywhere that I can lock the door
9. Favorite movie? - LOTR
10. Favorite dish? – mushroom and broccoli wood-oven pizza
11. Favorite color? -  purple
12. Favorite quote? – “Some people are like Slinkies.They aren't really good for anything, but they still bring a smile to my face when I push them down a flight of stairs.” – Iron Kissed by Patricia Briggs
13. A bunch of small gifts or one big expensive one? – small gifts
14. Your best trait? – I can laugh about almost anything
15. Your worst trait? – Attention whore. Lol.

I began my writing journey while I was stranded at the airport waiting for my delayed flight. I browsed the Border’s kiosk and grew frustrated that I couldn’t find the “it factor” — the perfect combination of alpha male-ness, ass-kickery, strong females, magic, and sex.

So I spent the next four hours on an airplane writing my first book on scraps of paper and an airsick bag (which thankfully I didn't need to use).

Now I spend too much time in my head, plotting evil villains and the hot men (and women) who ruthlessly kill them. I think far too much about fae politics, dragon power games, and how fast werewolves can change forms. But writing my paranormal romance series has given me a productive place to express those dark places in my mind.

I live in New England with my husband and two kids. Though I will go to my grave denying it, my husband insists I would be thrilled if he suddenly sprouted fangs.

The author will award a backlist eBook, and $25 Amazon or BN GC to one randomly drawn commenter during the tour and to the host with the most comments (excluding Leia's and the hosts).

Just comment in this post to enter this giveaway.  Anonymous and Name/URL comments SHOULD contain their email IDs in the comments. 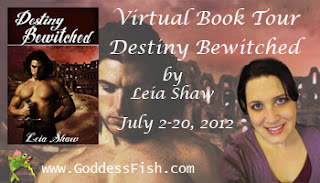