Review: The Bane of Yoto 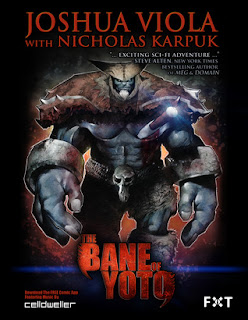 Some say the Arbitrators existed long before the world was born. Others believe their dark powers spun the fabric of time itself. They are mystery.

But here is truth: After ages of formless existence, the Arbitrators craved physicality once more. In their search for a worthy body to inhabit, they destroyed the world Ajyin – home of the gentle, blue-fleshed Numah and the combative, carapaced Olokun.

But not all was lost. General Vega and his vile Olokun warriors enslaved the remaining Numah. They relocated to Neos, Ajyin’s thriving moon.

There, under Vega’s imperious rule, the Numah toiled to extract minerals for a defensive barrier called the Aegis Shield. It would protect Neos from the Arbitrator’s return, the General vowed.

However, the Arbitrators’ hunger sparked a great fire – a blaze of revenge and revolution that soon found its home in the heart of Yoto, a weak and cowardly Numah. Now Yoto’s days of cowardice are over. He is transformed, a powerful and dangerous being beyond Vega’s control …

3D Comic based upon the novel available now for mobile devices.

"The Bane of Yoto" was an amazing tragic and thrilling read!  Not a fast read, but thought-provoking at the start and action-packed at the end.  With excellent writing and thrilling plot, the author has created the scenes well.

The plot starts with the lives of Numah people, who are treated terribly by Olokun.  Among these Numah people were the kids - Eon, Yoto and Celeste - and their parents.  Their parents were killed in the arena, before their very eyes.  Eon waits for revenge for years..few of the other Numah people also help him.  They want to kill the Olokuns and take over the entire planet, as the Olokuns destroyed their planet.  Although it started very slow, it was action packed after some time.

The writing was okay, the world building was great and the characters are scary.  When the author needed some action in the story, she just brings in a new character..got to love that - it just added to the thrill and action.

Recommended for those, who want to try science fiction!

Email ThisBlogThis!Share to TwitterShare to FacebookShare to Pinterest
Labels: Sci-fi