Interview with the authors of "Sins of the Mind" 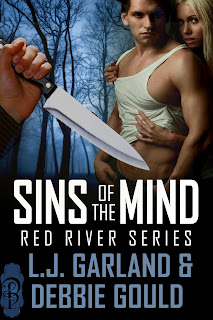 Seven years ago, Abby Montgomery survived a brutal attack. Now she is ready to put her pain in the past and move on with her life. The problem is, one by one the men in her life are being viciously murdered.

The detective assigned to the case, Ethan Parker, has demons of his own to hide. As the danger gets closer to Abby, so does Ethan. But can they get past his secrets before the killer gets to them? Sometimes the sins of the mind are more depraved than the sins of the heart.

DEBBIE GOULD : Thanks for inviting us, I’m excited.
LJ GARLAND : Yes, thanks so much for having us today!

1.      Is there an inspiration behind why you chose writing?


DEBBIE GOULD: I’ve always read, but basically my daughter had gone through a particularly hard break up, so I decided to write about the type of man I thought she deserved.
LJ GARLAND: It wasn’t until I met my husband that the bug really bit. This story idea just jumped into my head, and I came home from work one day and said, “Honey, I want to write a book.”

DEBBIE GOULD: A Marine Biologist, then I wanted to join the Navy and be a chef on one of their boats. I ended up being a nurse, lol.
LJ GARLAND: Well, I wanted to be the President of the United States until I was twelve. Then I smartened up! lol After that I wanted to be an actress. Did that for a while then moved to teaching college and that led to home schooling my three boys… Wow, I’m old!

DEBBIE GOULD: We’re actually working on three stories right now.
LJ GARLAND: Oh gosh, yes…we are! We keep tossing these chapters back and forth and sometimes I forget which character goes with which story. LOL
DEBBIE GOULD: I try to keep her straight, but it’s difficult at times. Especially if Laura hasn’t had her coffee.
LJ GARLAND: (glances down at coffee cup) Oh wait. I need a refill. Back in a sec.
DEBBIE GOULD: (sigh) We are working on the next book in the Red River Series, yup more murder, mayhem, and romance, lol.
LJ GARLAND: Back. Now, Red River series? Yep, we’ll be torturing the next characters even more than the first. Though, I think Sins of the Mind had several unexpected twists…and the characters got banged up pretty good.
DEBBIE GOULD: Think we should tease?
LJ GARLAND: Why not? LOL
DEBBIE GOULD: Okay. So, the next story in the Red River series is Will Donovan’s story. Here’s a little bit of our latest WIP….

FBI Agent Will Donovan jogged down the platform toward the train. Each step jolted the flashlight in his hand, sending the beam of light dashing over the concrete in front of him. Would he be too late?
Rows of light illuminated the abandoned trains, left in an old offshoot line of Boston’s Boylston Street Station. He rushed past a wall decorated with graffiti and cobwebs, his footsteps ringing hollow in the old concrete-lined tunnel. Behind him his partner, Kate Yarbrough followed.
“Will,” she called, her voice a harsh whisper filled with warning.
He slowed up. Kate was right. Rushing in could get them both killed. Just because the psycho bastard hadn’t set traps before didn’t mean there weren’t any this time. With both hands, he swept his flashlight beam and Glock 23 across the area, searching out the monster who’d murdered so many women. But only dirt, gravel, and rusted tracks were revealed.
He twisted back to his partner, who tilted her head toward the train car. Get on the train, Will. Find the girl. He nodded.

DEBBIE GOULD: I’d go back. I have some unfinished business, lol.
LJ GARLAND: To the future. Definitely would want to see what happens next….
DEBBIE GOULD: We really don’t pic a “topic” to cover. Basically we let our characters tell their own story.      What ever that may be.
LJ GARLAND: We’ve already laid out the next several books in the Red River series, plus two other paranormal romance series.

DEBBIE GOULD: Having readers tell me they loved the story and can’t wait till the next.
LJ GARLAND: Yes! Hearing from readers has been wonderful.

DEBBIE GOULD: Don’t give up.
LJ GARLAND: Learn the craft. Write the best story…and most important…Never quit.
LJ GARLAND: Not sure which book exactly, but it would probably be a sci-fi romance.

DEBBIE GOULD: Starting over at 47.
LJ GARLAND: Coffee & a Touch of Insanity

DEBBIE GOULD: Abby and Ethan’s first love scene. It takes a lot for her to let her guard down and trust him, he doesn’t make her sorry she did.
LJ GARLAND: Ooo. Yeah. That’ is a good scene. I like the scene where Ethan has Elliot Swanson in the interrogation room.

7.      Nickname?
DEBBIE GOULD: Don’t have one.
LJ GARLAND: Nope, me neither. Hmm…maybe we should come up with some.

12.  Favorite quote?
DEBBIE GOULD: Currently the one running through my mind is not appropriate.
LJ GARLAND: Never give up. Never surrender.

LJ GARLAND: Thank you so much for having us here today!
DEBBIE GOULD: Yes, thanks! We had a wonderful time!

- We can be tracked down at http://www.garland-and-gould.blogspot.com/ where we blog, chat about stuff, and interview other authors.
- L.J. can be caught at www.lj-garland.com and emailed at mail@lj-garland.com You can also tweet her at @LJ_Garland1
- Debbie can be found at http://www.authordebbiegould.com/ and emailed at mountecho2006@yahoo.com. You can tweet her at @DebbieGould
- We love hearing from people who have enjoyed our stories!

And you can find Sins of the Mind here! 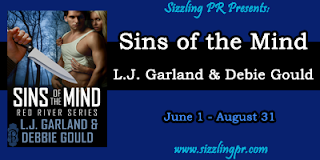