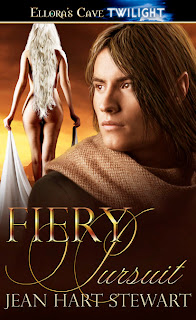 When Lars uses his Elfin power to rescue Sophie from a slave market in Constantinople he knows instantly she is meant to be his mate. But the murderer of Sophie’s father still pursues her, and Lars must all his strength to try to save her. And convince Sophie he is what she wants.

The villain who sold her into slavery reappears and Lars needs all his Elfin strength. When his power mysteriously weakens, can Lars get it back? And will it be enough to save them both?

“I’d as soon bargain with the devil himself.”

With pride and relief, Lars heard his beloved’s voice and he knew he’d been in time. He ran down the hall on silent Elf’s feet, toward the auditorium, anxious to confront Mallory. On a quick whoosh of admiring breath, he realized she was expressing her contemptuous disdain of a man capable of killing her where she stood. One who’d do so without a qualm. He didn’t need to see her to know she was standing straight and proudly, her magnificent eyes flashing only scorn, not fear.

As he leapt toward the door to the meeting room, he heard Mallory’s growl.

“You’ve just killed what little mercy I felt toward you, you arrogant bitch. You’re no match for me. This time I’m going to take my pleasure of your body being bound and at my mercy. Then I’ll use this cane to whip your back to shreds. And then I’ll give you to Smythe. There’s no one now to protect you, missy.”

Sophie stared at him, refusing to lower her eyes or her proud stance. He might as well kill her as do what he threatened. But she’d never, ever show her fear to such a rutting beast.

And Lars stepped through the door, his tall powerful body held in readiness, as were his fists.

Who is your book cover designer and what do YOU think about the cover?
A.   Dar Albert. He’s one of the best for Ellora’s Cave and I felt lucky to have him. LOVE the cover.

3.   What are your current literary works?  Any sneak peaks?
A.  I have two other books released this month. Love’s Magic is out from Passion in Print. Spies and Roses, a sexy historical, is out from MuseItUp.  I’ve got the sequel to  Fiery Pursuit,, Stormy Pursuit, being edited, am doing final checks the next book, Dark Pursuit. Reluctant Pursuit, book four in this eight part series called Passionate Pursuits is well-along. Can’t quote anything from Stormy since it’s under editing, but here’s a snippet from Dark Pursuit.

“As he headed toward shore he could pay more attention to his swimming. Going this direction he was helped by the tide. He put his head down and enjoyed one last, fast swim.  When he reached shallow enough water he stood and shook some of the moisture off and started toward the other swimmer. He was standing with a towel in his hand near a big rock, his back to Aidan. Drying his hair with vigor, hair that now showed more than a little red. Hair that nearly touched the sand when he leaned over to towel the thick mass. Hair that crowned a figure that was definitely not a man’s. A shapely, deliciously curved female, with grace inherent in every motion. She wore a plastered-to-her bathing suit that left each curve outlined and unbearably provocative. Long, sun tanned legs. And when she turned to face him, the features of a Madonna come to life. A Madonna who looked him over and laughed.

Aidan bristled at first and then remembered his naked state. No wonder she was chuckling. Here he was, without a stitch on him and nothing he could do it until he retrieved his clothes. Which naturally were at the opposite end of the beach. By the magic of all elves, she was magnificent. He couldn’t resist running his gaze over those perfect curves once again. He felt his cock start to rise, and saw her eyes widen and her beautiful face grow sober.He took a step toward her. When she grabbed at the towel to cover herself a little, Aidan found it was his turn to chuckle. “

4.      What movie and/or book are you looking forward to this year?
A.    I know you’ll think I’m crazy but I seldom go to the movies. Just not enough time. Books, any book by my favorites. Mary Balogh, Susan Johnson, Stephanie Laurens, Julia Quinn, and etc and etc. In fact almost any book.

5.      If you could invite any 5 people to dinner who would you choose?
A. Mary Balogh, Shakespeare, and my children.

7.      Please tell us in one sentence only, why we should read your book.
A. Because it will take you on a sensuous journey and leaves you with a reaffirmation of how        powerful, how wonderful love can be.

8.      Tell us your most rewarding experience since being published.
A. My family’s complete support, even though they secretly wish I didn’t write so much about sex.

9.      What's one piece of advice you would give aspiring authors.
A. Write, rewrite, and then polish. Then send it to a trusted beta editor before correcting it and     submitting it. Be sure it’s the best it can be.

10.  If you could jump in to a book, and live in that world, which. would it be?
A. I’m currently intrigued by the world of 1898, when Fiery Pursuits takes place. Such an    interesting time, especially in British history.

11.  If someone wrote a book about your life, what would the title be?
A. ”She’s Lucky and She Knows It.”

12.  What is your favorite scene in the book and why do you love it?
A. When Lars scoops Sophie up and carries her to bed for the first time. I love it because of     the passion and because of his inner acknowledgment he is hers for the rest of his life. That she doesn’t know this and wouldn’t believe it if she did makes it more poignant to me.

13.  What TV show/movie/book do you watch/read that you'd be embarrassed to admit?
A. I love Susan Johnson’s erotica books. I can’t think of anybody I would be ashamed to admit   it to, though.

14.  What is one book everyone should read (apart from yours)?
A. Pride and Prejudice. So much insight into human nature and so cleverly written. Especially at a time when women were not accepted as writers.

15.  What is your favorite way to spend a rainy day?
A. and writing, like most of my other days. If it’s nasty enough to make me feel self-  indulgent then I’ll read more than usual.

Favorite writing spot?
My comfortable chair in the living room

Favorite quote?
All things happen for a purpose.

A bunch of small gifts or one big expensive one?
Whichever comes with the most love.

Your worst trait?
Grudging someone something.

Love living in California, even though I’m a transplant. Love writing and all it entails, crazy characters demanding to be let loose on the page, long hours of research, every bit of it. I raised two children and spent about twenty years in real estate before I summoned the courage to quit and do what I always wanted to do, WRITE! While he was alive my husband was my first-stop editor and biggest fan. Now that my children are accustomed to my writing sexy novels they’re equally supportive.

I’m currently finishing my 24th book, tentatively named Double Pursuit and I have four books coming out this year. My Mage series is finished and I’ve started a new series where the new hero has Elfin blood. He’s fun, as well as tall, lithe and gifted. I think I’m blessed as well as lucky. Do write me with any questions. I love to hear from readers!

At every stop, Jean will give one commenter her choice of a book from Jean's backlist which can be found at www.JeanHartStewart.com At the end of the tour, one random commenter, as well as the host with the most comments will win their pick of Jean's books in print, plus a Fiery Pursuits t-shirt.

Anonymous and Name/URL commentors - please comment WITH your mail ID. 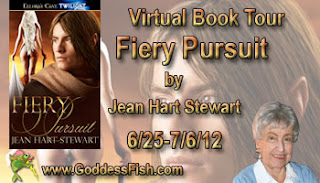