There are several underlying inspirations! First would be the fact that I was never the kid in school who was interested in the cut and dry – you know, what was going on in class. I was the kid who was always looking out the window, daydreaming about what land I could be princess of when I got home. Visuals of creatures, plants, and characters would race through my head and I couldn’t wait to get home and start playing with all of my imaginary friends. Secondly, my husband and I have been involved in the technical side of productions and entertainment since we started dating back in the 70’s. In ’98 we started our own live event and production company, Multi-Tech Productions Inc. Through that we have helped schools, churches, and community theaters with the technical side of their productions. My health failed me, taking me away from the physically demanding work of production, so I turned to baking gourmet dog treats – the family business for years. I expanded the dog treat business, and included a bakery filled with sweet confections for people. I designed four restaurants complete with menus, recipes, and venue specs. My health condition relapsed, and I collapsed yet again. Not being a quitter, I turned my creativity to writing – and can gladly say I’ve found my niche` in life…it only took 50 years! LOL! 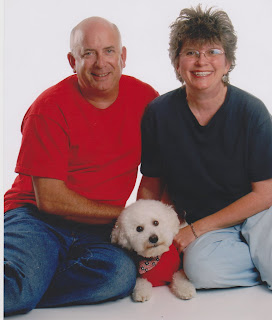 I wake up and give thanks for being able to stand up, see, hear, taste, feel, and smell the loveliness that air holds. My dog and I spend a few minutes together as I “tickle” his bum causing him to grunt and wiggle in a silly way. I head out to the kitchen and prepare my breakfast…a chocolate vitamin drink. Me and my doggie head into the writer’s den and officially start the day. He loves to sit on his little bed in the window and watch the squirrels – birds – turtles – and other wildlife romp and play. Lunch time comes, and if off to the local diner where everyone in this small town gathers and delivers the latest news of town. Afternoons are spent on the porch, just me and my doggie (he has his very own special chair out there too), writing and creating my novels. Finally the sunsets, and hubby makes it home. If the timing is right, we head out for some dinner together to catch up on the day and enjoy each others company…I mean that is the reason I married the guy over 30 years ago – I love to spend time with him. Darkness falls, and it’s off to chill and watch some TV, then it’s off to bed. Chronic illnesses have a way of slowing you down in a hurry.

My next 5 novels that stem from Maycly as I can’t wait to see what happens to the new list of characters as well as the old stand-bys. Adventure, love, trials, all kinds of cool stuff! Seriously, I can’t wait.

The five novels that will stem from Maycly and make up the complete series of Hidden Earth are what’s on the horizon. I’d give some sneak peaks, but it’s been to soon to the release of Maycly, I don’t want to produce any spoiler alerts for those who are planning on reading Maycly. Perhaps by the end of the year you’ll start hearing about the next book(s).

What was your favorite book when you were a child/teen?

Anything Dr. Suess or Disney

If you could be one of the Greek Gods, which would it be and why?

This is one of those things we were probably supposed to be paying attention to in class, but I was daydreaming…so I don’t really know which one I’d be. I can take a stab at it though – if there were a goddess who could help people, sea creatures, and animals in need I would choose that one.

I watch and read a diverse range of genres, and I must say that none of them are “hidden” from my life because they would embarrass me. But let’s say I had to pick one that everyone would think I was nuts for liking would have to be Speed Racer. Loved the graphics in the movie – found it very entertaining. I figure most people wouldn’t have singled me out as a Speed Racer movie fan – it may surprise them, but not embarrass me. J  Another  old TV show I loved was Lost in Space…and again, loved the movie. Embarrassing? No, just fun!

I’ve not had it as of yet – but I’m waiting for it. It will come when someone who has been “down and out” on life lets me know that Maycly and the Hidden Earth Series has given them hope to never quit on life.

In my genre of epic fantasy the piece of advice I would give would have to be never let anyone tell you that it can’t be done. If you’ve got an epic story inside of you, write it no matter what.

Maycly of course! It’s got everything from the greatest peeps and chukkons to the most fun loving animals, and gorgeous terrains. I’d give anything to be able to keep bouquets of lavendaria on my tables and night stands at all times.

That would have to be the first epic battle. It’s not that I’m into war and battles at all. It’s more so the fact that I learned so much writing that battle scene…it took eight months…and felt like I had accomplished a brand new hurdle and met a challenge head on and won!

What is one book everyone should read? 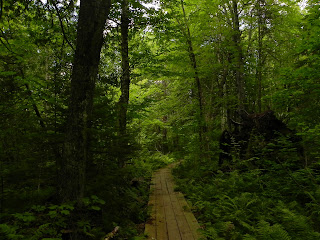 Best Christmas present?
It wasn’t for me, but for my elderly parents – we flew my sis and brother-in-law in from Michigan (without the folks knowing) and wrapped one in a washer box the other in a dryer box…mom and dad couldn’t understand why they needed a new washer and dryer…until they opened the lids and out popped my sis and her hubby.

Nickname?
Bunky, Skee, and Tart – depends on who’s calling or texting me J

Favorite dish?
Carrabba’s Filet Marsala with a side of fettuccini Alfredo

Favorite quote?
It all started with a mouse (Walt Disney)

Your worst trait?
Lack of self confidence 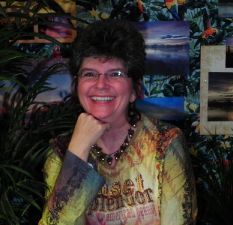 Janet was born and raised in Ohio. She and her husband, Don, moved to Florida in the 1980′s to not only escape the cold winters, but to also pursue their careers as live event and production specialists. It was through their parent company, Multi-Tech Productions, Inc, that Janet's creativity was given free reign to soar. She was published in trade specific magazines, published non-fiction books, spoke at international conferences nationwide, and developed training classes pertaining to technical theater applications. When chronic illness stopped her in her tracks, it didn't stop her as a creative genius. Once she was back on her feet she took over the family gourmet dog treat business and expanded it by adding a full scale bakery to the already established "BARK"-ery. Again she collapsed, and again she didn't let it keep her down. Her creativity crested new horizons, and after putting herself through schooling at age 49 she became an epic fantasy author. She birthed JLB Creatives, a subsidiary of Multi-Tech Productions, Inc., which handles the publishing and authorship side of the business.

Volume 1 - Maycly in her HIDDEN EARTH series was an eight year project brought to fruition by her determination, dedication, and zest for life! Janet and Don still reside in Florida. Janet is a dog lover who enjoys tandem kayaking, photographing nature, and baking cupcakes. 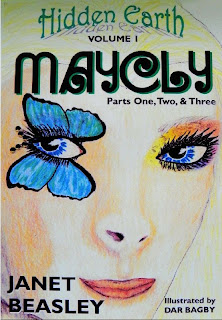 Well readers, the author is giving away an autographed copy of Maycly (Complete Hidden Earth series set) to one winner of Continental US.  If you are outside Continental U.S., you have to take care of the shipping charges.