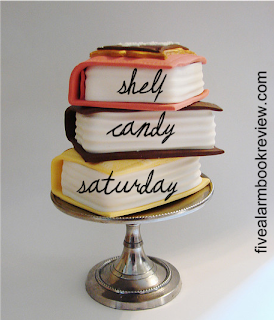 This is where I feature a favorite cover and its artist, which does not have to come from a new release or something that I received in my mailbox.  Any cover that I discover and love will fit the bill.

My pick this week is The Universal Mirror by Gwen Perkins. 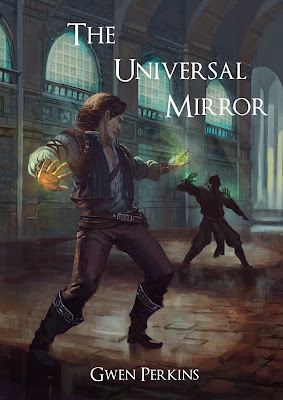 On the island of Cercia, the gods are dead, killed by their followers and replaced with the study of magic. Magicians are forbidden to leave their homeland. Laws bind these men that prevent them from casting spells on the living--whether to harm or to heal.

Quentin, a young nobleman, challenges these laws out of love for his wife. His best friend, Asahel, defies authority at his side, unaware that the search for this lost magic will bring them both to the edge of reason, threatening their very souls. The Universal Mirror shows how far two men are willing to go for the sake of knowledge and what they will destroy to obtain it.


The Universal Mirror is the first novel of the fantasy series, Artifacts of Empire.  Its sequel, The Jealousy Glass, will be released this November.

This book is from Hydra Publications.   I loved this novel plot and these are some of the links where you can find this book.

Here are some important Q&A separately with the author and designer.

Q&A with Gwen Perkins, author of The Universal Mirror

What do YOU think about the cover?

I love it.  I honestly can't say enough about how wonderful it is and how well it captures the spirit of the story.  I've been a fantasy reader for years and I was a little apprehensive when it came to cover art.  The Universal Mirror isn't the kind of story that would be suited by some of the art that I've seen—I think we've all seen the novels that use sex to sell.  Fantasy can be particularly bad about this although it's gotten better.

The cover is different.  What information are you trying to say to the readers, whose first impression is this cover?

I wanted a sense of mystery as well as magic on the cover.  The Universal Mirror is a quirky novel that hearkens back to my love of the old fantasy novels I grew up reading as a kid (Fritz Leiber, Anne McCaffrey, Robert Silverberg, etc).  One of the reasons that I love the artwork so very much is that it also evokes that style of artwork for me.  It conveys so much with the use of color and staging alone—and what a thrill to see my characters through someone else's eyes, particularly someone with as much talent as Enggar has.

Who is your designer?  Can you share some details about him?

Amusingly enough, Enggar was my top choice as cover artist.  I spent hours surfing the internet back when Hydra accepted my title and kept coming back to his portfolio.  When my publisher asked me who I wanted to do the cover, I sent him Enggar's name and asked if we could look for an artist like him.  (I thought there was no way I'd get someone that awesome to do my cover.)  Imagine my surprise when I got an email back saying that Enggar was on board!

And I'll also tell you that we have just asked Enggar to design the cover for The Universal Mirror's sequel, The Jealousy Glass.  I'm really looking forward to seeing his next creation!


Q&A with Enggar Adirasa, artist of The Universal Mirror

How do YOU feel about this cover being released?

I'm excited for sure! I hope people like the cover as much as the book itself.

Did you think of any other covers to this title?

The idea for the cover was already narrowed down at the beginning since Gwen already determined what scene that she wanted to have depicted for the cover. I had several alternative sketches at the beginning, a more frontal magic duel and all, but in the end, I decided to execute the current artwork, which looks more calm and mysterious since it fits with the overall mood of the story.

To be honest, I rarely track my works for the cover books. Most of my clients want to keep their title and cover artwork concealed until it's published. I'm doing a wide spectrum of illustration though, aside for cover illustration, I'm also doing a lot of illustration, mostly for trading card game and mobile game assets. You can always check my works showcase at the site, if you're interested.

You can contact my mail and YM via sensevessel@yahoo.com, or skype at enggar.adirasa.

The author has shared some amazing first drafts that led Enggar up to this intriguing final cover!  So, here it is, for you, readers! 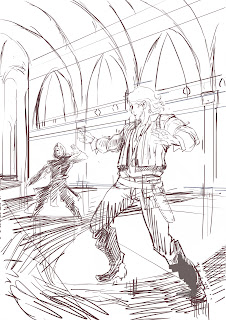 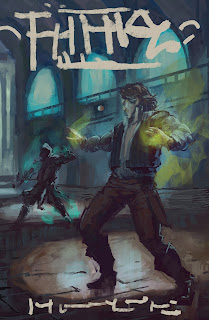 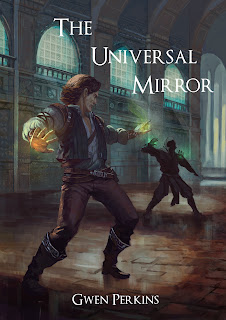